The Microgaming Poker Network has announced plans to expand its offerings of poker players having the ability to play anonymously at cash game poker tables. 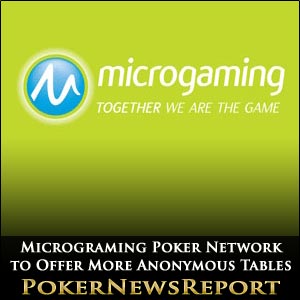 The Microgaming Poker Network has announced plans to expand its offerings of poker players having the ability to play anonymously at cash game poker tables.

In a move that may ultimately be the wave of the future in the online poker industry, Microgaming will make all no-limit heads-up tables completely anonymous and full ring no-limit and 6-max limit anonymous tables will be offered sporadically at all stake levels. A limited number of anonymous tables will also be available at “beginners” tables.

Microgaming’s announcement to expand its site’s anonymous poker tables comes at roughly the same time that Bodog Poker revealed new software on its poker site that completely removes the screen names of players from cash and tourney real money poker games, allowing all players to compete anonymously in an effort to prohibit experienced players from enabling poker-tracking software designed to gain an advantage over casual and recreational players.

Other poker rooms have toyed with similar forms of anonymity for players. PartyPoker allows changes to players’ screen names and has featured optional anonymous tables for heads-up play. Cake Poker has often touted the ability of its players to change individual screen names and also had, until recently, banished the use of all HUDs.

The expansion of anonymous tables marks Microgaming’s first major move since establishing a “Network Management Board”  last month designed to fuse together the major brands on the network in an effort to “contribute towards the success of each other and to the network as a whole.”

The board is made up of a lone representative from each skin on the network. Popular brands of the more than 30 sites on the network include 32Red, Ladbrokes, Unibet and NordicBet.  Microgaming currently sits in eighth place in player traffic among online poker rooms.