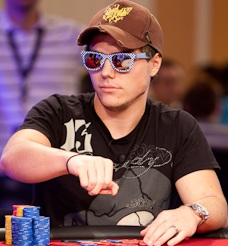 20-year old German poker player Micheal Eiler has won the 2010 PokerStars.net European Poker Tour Vienna Main Event after defeating a tough final table which included Team PokerStars Pro’s Daniel Negreanu and Martin Hrugby. Eiler actually qualified for the event through a satellite tournament on PokerStars and what an investment that has turned out to be with him now becoming EPT Vienna Champion and pocketing a massive €700,000 for the win.

Before the beginning of the final table we wrote an article about the EPT Vienna final tablists and in it we stated that Eiler would have a tough task ahead of him if he was to win the event because yesterday he finished the day poorly – losing around 2million of his chips in the final hour to leave him with 2,160,000 entering the final table, however he played well to take down the win – congratulations Micheal!

All eyes were on Team PokerStars Pro Daniel Negreanu entering todays final table as he entered with a considerable chip lead however he was involved in a big 3-way pot which turned the tide and seemingly left him on tilt, and ultimately eliminated in fourth place soon after. He was hoping to claim the win and jump to the top of the all-time money list ahead of Phil Ivey and become a Triple Crown winner (winer of an EPT, WPT, and WSOP title), something that only two other players have achieved before – Roland de Wolfe and Gavin Griffin, however it was not be for Negreanu.