Six players remain in the WPT La Poker Classic, with Michael Rocco leading the final table after a day of intense action and a stack of hard luck stories. 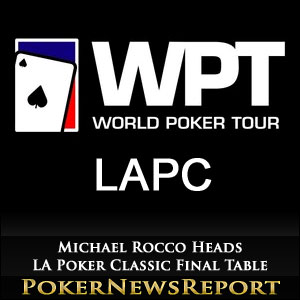 Six players remain in the WPT La Poker Classic, with Michael Rocco leading the final table after a day of intense action and a stack of hard luck stories. Eighteen players returned to the Commerce Casino yesterday to fight out who would take the six seats at the final table of the WPT LA Poker Classic. Only overnight chip leader Josh Neufeld and six other players had chip stacks above the average; and, with three players dangerously short-stacked, the action kicked off almost immediately. The game resumed with just short of an hour left in Level 22 (blinds 8,000/16,000 – ante 2,000) and before the end of the Level three players were eliminated – Heath Mendelsohn losing a race with 4♠ 4♥ against Huy Lam´s J♠ 10♠, Erkut Yilmaz´s J♠ 10♥ failing to improve past Glenn Lafaye´s K♥ Q♥ and Lafaye also being responsible for the demise of Hasan Habib when his Q♦ J♥ out-kicked Habib´s J♣ 9♣ on a Jack-high board.

Singer, songwriter, actor and occasional poker player – Patrick Bruel – entered the penultimate day of the WPT LA Poker Classic as one of the players with an above-average chip stack, but saw it sliced in half in a first-level tussle with Josh Neufeld. Bruel recovered dramatically, busting out Huy Lam in fifteenth place (A♥ 4♠ > A♠ 3♣) and Michael Pickett in fourteenth place (A♥ K♣ > 7♥ 7♣) to chip up beyond 2 million chips. Michael Rocco was also on a roll. The Los Angeles local took control of his table by eliminating Alexandru Masek in thirteenth place (A♣ K♣ > A♠ J♠) and Ludovic Assouline in twelfth place (Q♣ J♦ > Q♠ 9♠), and then using his big stack of chips to force other players out of pots in order to take the chip lead.

Several players hit the rail with hard luck stories during Day 5, and most of then started with the elimination of Tab Thiptinnakon. Thiptinnakon had nursed his short stack through two levels of play, and found a good opportunity for a double-up when moving all-in from under the gun with A♦ 5♦. The action folded around to Adam Friedman in the Big Blind, who made the call with A♣ 4♠. The flop of Q♣ 7♣ 4♦ put Friedman ahead in the hand, but Thiptinnakon had two overcards and a Flush draw after the K♦ was dealt on the Turn. Unfortunately the 3♠ bricked on the River and Thiptinnakon was sent to the rail in eleventh place. The hand which signalled Joe Serock´s departure in tenth place was a fairly straightforward race in which his Q♠ 3♠ failed to make its Spade flush draw against Allen Pock´s paired K♥ 7♥; but the hand which left him short-stacked was one just before in which his pocket Three´s had the beating of Dan O´Brien´s A♦ 10♠ until two pairs were dealt on the board and Serock´s pocket Threes were counterfeited by O´Brien´s Ace kicker.

Kazu Oshima was another player who had nursed a below average stack through the day, and another player who believed he had found the perfect opportunity for a double-up. Oshima moved all-in from the Big Blind with A♣ Q♠ in response to Dan O´Brien´s button min-raise with K♣ 9♦. O´Brien made the call and the cards were on their backs – Oshima a 2/1-on favourite to survive the hand. Unfortunately for Oshima, O´Brien paired his Nine on the flop of J♦ 9♥ 7♥ and his King on the River to send him to the rail in ninth. Allen Pock´s misfortune was more attributable to his mis-timing than anything else. Following the flop of 7♥ 6♣ 4♠, Pock (Q♣ 8♣) responded to Glenn Lafaye´s raised by shoving all-in. Lafaye made the call with 5♥ 3♥ for a flopped Seven-high straight, and only a Five could save Allen Pock from elimination. The board completed with the 10♣ and 3♠, and Pock was bust from the WPT LA Poker Classic in eighth place.

Dan O´Brien started the day as the shortest-stacked on the eighteen remaining players, but enjoyed a superb start to the day – doubling up against Kazu Oshima 6♥ 6♠ > A♥ Q♥ and Erkut Yilmaz 9♣ 9♥ > 4♠ 4♥ in the first level of the day, before further double-ups against Adam Friedman A♥ K♠ > A♠ 5♠ and Josh Neufeld 7♣ 7♦ > A♦ Q♠ gave him a workable stack of 1.16 million – equivalent to fifty-eight Big Blinds at the time. Further successes in hands against Michael Rocco and Allen Pock (in addition to those against Joe Serock and Kazu Oshima above) saw Dan O´Brien´s chip stack pass through the two million barrier, and he was looking good for a seat at the final table – until the last hand of the night. On a board of 10♠ 9♦ 8♦ / K♣, Dan O´Brien moved all-in with A♣ A♥ and Michael Rocco snap-called with K♦ Q♦. O´Brien was a 2/1-on favourite to take the hand and double-up into the chip lead, but the 6♦ spiked on the River to eliminate O´Brien in seventh place, and put Michael Rocco in a very strong position when the final table gets underway later today.

Looking ahead to the WPT LA Poker Classic Final Table

One player that has not been mentioned above is Chris Moorman. Moorman voted “Best Online Tournament Player” at the recent British Poker Awards, showed that he can turn on the style in the live arena and, after a pretty quiet day by his standards, chipped up into second place when forcing Adam Friedman out of a 1.1 million chip pot just before the close of play. With blinds of 15,000/30,000 (ante 5,000) when play resumes, Moorman is 81 Big Blinds behind chip leader Michael Rocco, but Moorman has position on the chip leader and our feeling is that Rocco will be the more worried of the two players!