Newcastle qualifier Michael Richardson topped 935 players to win the Nottingham leg of the Genting Poker Series after a late night conclusion to the final table. 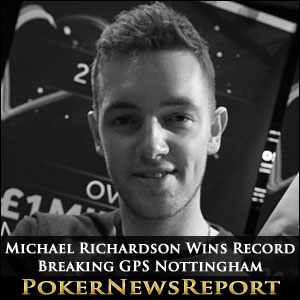 Newcastle qualifier Michael Richardson topped 935 players to win the Nottingham leg of the Genting Poker Series after a late night conclusion to the final table.

The Nottingham leg of the Genting Poker Series set new records for the Tour, as 935 players ponied up the £440.00 buy-in for the event, qualified online or at one of the live satellites hosted around the country at Genting casinos.

Three Day 1s were hosted at Dusk till Dawn (one online and two live) from which 263 players returned to the club on Saturday for Day 2. Half way through Saturday´s action the money bubble burst when JP Kelly´s Ace-Nine flopped two pairs to send Stuart Barnett (Ace-King) to the rail and, after a 2.30am finish, thirty-eight players returned to the Nottingham club on Sunday to contest the GPS final day.

During Day 2, a major hand occurred in the last level in which Stuart Giulian had been dealt pocket Aces, Ken Billups got all-in with pocket Queens and John Conroy woke up to pocket Kings. The Aces held and Giulian (2,276,000 chips) started the final day with a substantial chip advantage over Michael Richardson (1,428,000 chips) and the remainder of the field.

After five hours of action, the final table of nine was set, headed by Simon Deadman, who had won a monster pot when spiking a four on the River to eliminate James Atkin Ace-Four > Ace-King. Stuart Giulian was close behind Deadman, with Michael Richardson, JP Kelly and circuit regular Tim Slater also in contention.

With blinds of 25,000/50,000 (ante 5,000), and big pay jumps between ninth (£5,500) and first (£80,000), the early action was fairly pedantic. Stuart Giulian regained the chip lead when turning a gutshot straight against Grant Mercado, but lost it to Niels Ladefoged when Ladefoged doubled-up Ace-Jack > Giulian´s Pocket Nines.

JP Kelly was the first player to depart the GPS Nottingham final table when he ran his Ace-King into Simon Deadman´s pocket Aces; and he was soon followed by Chris Vernon, who got the last of his chips in with Ace-Eight and got a call from Michael Richardson (Ace-King). Vernon had no hope of recovery when Richardson flopped trip Kings and he left the table in eighth place.

The names at the top of the leaderboard continued to revolve as two more players departed the GPS Nottingham final table. Simon Deadman took over at the top once again when his pocket Kings held against Grant Mercado´s Ace-King to send Mercado to the rail in seventh place and, despite flopping a King, Asif Rajah (King-Queen) was bust in sixth place when Michael Richardson (Ace-King) flopped two pairs.

Tim Slater then took over as chip leader when doubling up against Stuart Giulian (Ace-Jack > Ace-Eight) and, as Level 30 began and the blinds rose to 60,000/120,000 (ante 10,000), Giulian was the shortest-stacked of the five remaining players:

Niels Ladefoged was the next player to be eliminated from the GPS Nottingham, after being slow-rolled by Simon Deadman. Ladefoged (pocket Nines) had been the aggressor throughout all four streets of betting, but when he moved all-in on a Queen-high rainbow board, Deadman snap-called with a flopped set of three.

Deadman was also responsible for eliminating Stuart Giulian in fourth place, after calling Giulian´s Ace-high shove, and then rivering trip Fives – shortly before which Michael Richardson had survived an all-in shove with Ace-Ten against Tim Slater´s pocket Sixes when spiking an Ace on the River and, as the table went three handed, Richardson survived a second all-in with King-Jack against Simon Deadman´s pocket Eights to chip up to 4 million chips.

With Michael Richardson refusing to go away, a deal was negotiated which saw Simon Deadman lock up £70,000, Tim Slater £42,500 and Richardson £38,000, with £1,000 and the title to play for. The deal looked particularly good for Deadman after Tim Slater had doubled-up into the chip lead (Ace-Four > King-Ten), but Simon Deadman doubled-back into the lead (Ace-Five > King-Ten) and then bust Slater K♥ 2♥ > 9♠ 7♠ after Slater had flopped two pair, but Deadman had flopped the nut flush.

Going into the heads-up (at 3.00am), Simon Deadman had a 2:1 chip advantage over Michael Richardson, and quickly extended the advantage to 20 million chips -v- 4 millions chips (blinds now 100K/200K with a 25K ante) with some aggressive post-flop play before Richardson doubled up Queen-Jack > Ace-Seven when hitting the J♦ on the Turn.

Richardson Moves Ahead and Hangs on to Win GPS Nottingham

Michael Richardson adopted the tactic of shoving his chips in every time he had the button, and the strategy almost backfired on him when once again he shoved from the button with Ace-Five, only to be called by Deadman, who had been dealt Ace-Ten. Fortunately for Richardson, a Five on the River gave him another double-up and elevated him into the chip lead.

The final hand arrived shortly after 4.00am, when it was Simon Deadman´s turn to move his chips into the middle. Michael Richardson made the call and the cards were on their backs – Deadman showing Ace-Eight and Richardson looking favourite to win the hand with pocket Tens.

Unfortunately for Deadman, the board blanked, and Michael Richardson was the winner of the GPS Nottingham for £39,000 – with Simon Deadman taking home almost double that amount courtesy of the earlier deal.