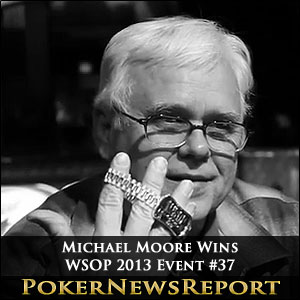 After riding the short stack for a while, Justin Bonomo eventually succumbed to defeat and was the first player to be eliminated from the final table. He was eliminated by Greg Mueller, who won a showdown against Bonomo with A♦ 6♦.

Bonomo, on the other hand, had J♠ 9♣ and needed to hit a pair if he stood a chance of staying in the event. That did not happen, however, and it was Mueller who hit a pair after the A♥ was shown on the river, winning him the hand and knocking Bonomo out in ninth spot.

The elimination did not help Mueller, however, as he was the next player to be knocked out of the event in eighth spot. It came at the hands of Gabriel Nassif, who outkicked Mueller in the showdown between the two players. Mueller had A♠ 4♥, while Nassif showed A♥ J♠, which held on the K♠ 8♠ K♦ 5♠ 2♦ board to end Mueller’s time in the tournament.

Ben Yu was eliminated just two hands later after losing a hand against Todd Witteles. Yu went all in with J♥ 4♥ while Witteles had J♦ 7♥, which hit a pair on the flop after the 7♦ was one of the three hands shown on the flop. Yu did have an inside straight draw, however, but he did not hit it on the turn or the river and he was sent packing in seventh spot.

Next to go was Dom Denotaristefani, who was knocked out of the event shortly after the dinner break when he lost his last hand against Ronnie Bardah. The short stacked Denpotaristefani, who had A♣ 9♠, went all in after the 3♥ 10♠ 8♣ flop and was called by Bardah, who flopped a set with 8♦ 8♠.

The 2♦ on the turn and the 4♠ on the river meant that Bardah’s set of Eights remained dominant and Denotaristefani was eliminated from the tournament in sixth spot with an extra $40,205 for his efforts.

Fifth place was decided in the very next hand after Witteles was eliminated by Brian Aleksa. After some back and forth raising and reraising before the flop, Witteles went all in with 7♠ 7♣ and was called by Aleksa, who showed K♠ Q♠.

Witteles remained in front after the flop came 4♥ J♥ 8♦, but that changed after the turn showed Q♥ which gave Aleksa a higher pair. The 3♦ on the river did not help Witteles and he was knocked out of the final table.

Aleksa would only be in the event for around another twenty minutes after eliminating Witteles as he too was knocked out of the event. He was eliminated by Nassif, who had Q♦ 3♥, after he called Aleksa’s J♦ 8♣ all in before the flop. The Queen high held on the 10♣ K♥ 5♦ 4♥ 2♥ board and Aleksa was eliminated from the tournament before three-handed play began.

Nassif then went on to claim his second straight final table scalp after he knocked Bardah out of the event. Bardah, who had K♠ 9♥, initially raised pre flop and was called by Nassif and his K♣ 3♦ before the A♣ 3♣ 8♣ flop was shown.

Nassif, who had a nut flush draw then put Bardah all in and he called. The 7♣ on the turn gave Nassif the flush he was after and he won the hand while taking Bardah out of the tournament in third place.

Bardah’s elimination left Nassif and Michael Moore as the last players on the table, with Nassif having an 810,000 chip led when heads-up play began. Moore would not give up, however, and he took the chip lead after a little over an hour of heads-up play.

In the last hand of the tournament, a war of pre flop raises and reraises erupted between the pair before Nassif went all in with Q♦ J♠. That was called by Moore, who was initially behind with 10♠ 4♣.

The 10♥ J♣ 8♥ flop gave both players, but kept Nassif in the lead and it appeared he would double up from the hand. That was not to be however, as the 10♦ came on the turn, giving Moore three of a kind and eventually the event as the 2♠ on the river did not help Nassif.