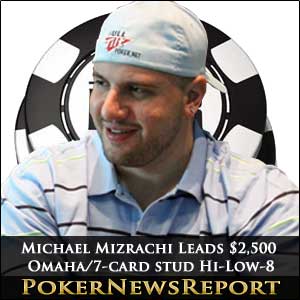 Florida’s Michael Mizrachi made a late move to go top of the chip leaderboard after day two of the $2,500 Omaha/Seven Card Stud Hi-Low-8 or Better event of the World Series of Poker (WSOP) in Las Vegas last night.

While obviously wary of his two fellow Americans, Mizrachi will also have to contend with the challenge posed by the likes of Scotty Nguyen, Barry Greenstein and Richard Ashby as they aim to add to their WSOP bracelet collections.

Ben Yu finished in 22nd when losing the final hand of the day to leave us with three tables of seven players each for this evening’s play.