Michael Mizrachi did what he does best in the WSOPE Split Format NL Hold´em Poker Championship – grind the opposition into defeat. 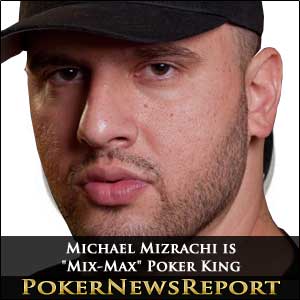 Michael Mizrachi did what he does best in the WSOPE Split Format NL Hold´em Poker Championship – grind the opposition into defeat.

Having successfully negotiated the full table and 6-Max legs of the “Mix-Max”, Michael Mizrachi´s heads-up skills came into play over the weekend – successfully taking advantage of the tournament format to enter the final against Shawn Buchanan with a 2:1 chip advantage before the first card was dealt.

The unusual sequence of events – where players carry their chips forward from the tournament legs to the heads-up has come in for a lot of praise. It encourages players to get involved in hands during the second leg of the event even though they may safely be through to the last 16. On this occasion it benefitted Mizrachi – who took a significant number of chips from Roger Hairbedian and Noah Schwartz just before the close of play on Friday.

The Significance of Mizrachi´s Late Gains

Having won his first two heads-up matches against Kent Lundmark and Brian Hastings, Mizrachi was drawn against Hairabedian in the first of Sunday´s finals. When play started, Mizrachi (1,136,000 chips) and Hairabedian (1,262,000 chips) were closely stacked. It could have been a lot different had “The Grinder” not relieved Hairabedian of 50,000 chips on Friday night. Similarly, Mizrachi had won a stack of Noah Schwartz´s chips prior to the heads-up rounds starting. This resulted in Schwartz (689,000) and Shawn Buchanan (670,000 chips) being closely stacked in the second semi-final and guaranteed that whoever won between Mizrachi and Hairabedian was going to go into the final heads-up with a massive advantage.

Starting any match at a 2:1 chip disadvantage could be considered a handicap – when you are playing against Michael Mizrachi, it can be considered a disaster! This was the scenario Shawn Buchanan found himself in after quickly dispatching Noah Schwartz in his semi-final, and he really never stood a chance in the final. Mizrachi wore his opponent down with a series of aggressive raises and took down the biggest pot of the tournament uncontested when shoving all-in on a board of 6♦ 6♥ 6♦ / 8♠ / A♣. Buchanan was forced to fold and – now crippled – got all his chips in a few hands later with A♣ J♦. Mizrachi called with A♥ 10♦ and came from behind to win when the 10♣ was dealt on the flop and there was no Jack to save Buchanan.

One Bracelet for Each Wrist

The WSOPE Mix-Max bracelet won by Michael Mizrachi will nicely compliment the WSOP Player´s Championship one he collected last year, and the €336,008 cheque for his victory moves Mizrachi into sixth in the all-time tournament money winners list. For Buchanan, this was incredibly his third cash in Cannes to supplement his five pick-ups in Las Vegas in the summer, and a deep run in the WSOPE Main Event will see him pip Ben Lamb and Phil Hellmuth in the WSOP Player of the Year competition.

The 16 players who made it through the first two legs of the tournament and into the heads-up all cashed in the WSOPE Split Format NL Hold´em Event. 125 players had paid the €10,400 buy-in, creating a prize pool of €1,200,000 which was distributed as follows:-