Michael ‘The Grinder’ Mizrachi has secured his second Poker Players Championship bracelet after taking down event #45 at the World Series of Poker in Las Vegas. 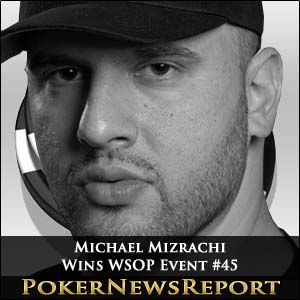 Michael ‘The Grinder’ Mizrachi has secured his second Poker Players Championship bracelet after taking down event #45 at the World Series of Poker in Las Vegas.

The Florida-based pro also captured his third WSOP bracelet after defeating Philadelphia’s Chris Klodnicki heads-up in the $50,000 buy-in tournament to become the first double winner of this prestigious event at the Rio All-Suite Hotel & Casino.

In fact, with his many successes and final table appearances, Mizrachi now ranks fourth on the all-time money leaderboard – and will no doubt be aiming to add even more jewellery to his collection over the next few weeks at the Rio.

Mizrachi began the heads-up clash with 10.5 million chips to the 5.7 million of Klodnicki. Klodnicki – who is still searching for his first bracelet – managed to pick up a few small pots early on, but was then overwhelmed by the aggressive Mizrachi.

It appeared as though Klodnicki had no chance of victory against the bold and hot Mizrachi, who eased to his success during an Omaha-8 hand.

The eight-handed final table started out at some pace on the fifth day of this event as Mizrachi took down three successive pots – the last of which saw him eliminate Pennsylvania’s Bill Chen (seventh for $205,856) and Frenchman Bruno Fitoussi (eighth for $169,879).

Fitoussi began as the short stack and decided to shove all-in for his last 170,000 chips during a hand of No-Limit Hold’em. Chen called, but Mizrachi then three-bet to 400,000. However, Chen was not to be dissuaded and shoved all-in for 1.2 million.

Mizrachi snap-called to show the massively dominating A♦ A♣ against the A♥ K♣ of Chen and Fitoussi’s 8♣ 7♣. The K♦ 5♥ 5♣ 8♥ 4♥ board kept Mizrachi ahead and Fitoussi and Chen hit the rail.

The chip leader just couldn’t be stopped and next sent British player Stephen Chidwick crashing out in sixth place for $253,497 during a hand of Pot-Limit Omaha. Chidwick had all his chips in the middle after the 3♥ turn arrived to join the 8♣ 8♦ 2♥ flop.

Mizrachi showed A♦ 4♦ 8♥ 2♣ for a full house, while Chidwick was in deep trouble with his K♠ K♦ 5♣ 4♠. The 3♦ river was no good to the Englishman as Mizrachi gathered in even more chips.

New York State’s Roland Israelashvili – who had qualified for this event by winning a $2,250 satellite in Vegas – did well on the final day to move up from the second shortest stack and take fifth spot for $317,882. He got all his chips into the middle during a 2-7 Triple Draw pot after Andy Bloch and Mizrachi checked down the hand. But he was unable to overcome Bloch and hit the rail.

English pro Luke Schwartz struggled to get anything going on the final day, so did well to take fourth place and $406,736 for his first cash in a non-Hold’em or Pot-Limit Omaha tournament. Additionally, this is also the Londoner’s biggest cash ever, so he should be pleased with his fantastic run.

Schwartz was all-in during a No-Limit Hold’em hand while holding A♣ 9♦ to take on the A♦ 6♥ of Klodnicki. The Englishman stayed ahead through the K♣ K♥ Q♥ flop and 5♦ turn, but was dramatically knocked out when the 6♣ came on the river to give Klodnicki two pair.

Klodnicki had chipped up well at this point and even took over as chip leader for a short while – although that wouldn’t last too long.

Vegas-based Bloch was runner-up to the late Chip Reese at the inaugural staging of this event back in 2006, but fell just short again as he hit the rail in third place for $561,738 after losing out to Mizrachi during a Limit Hold’em hand.

Bloch’s last hand saw him get all his chips in pre-flop, with Mizrachi and Klodnicki calling to see 7♦ 7♠ 3♣. Both players still with chips behind checked, while Bloch got it to heads-up after Mizrachi folded following Klodnicki’s bet on the 7♥ turn. Bloch showed Q♥ 4♥ to face the A♦ J♠ of Klodnicki and was sent packing after the 8♣ arrived on the river.