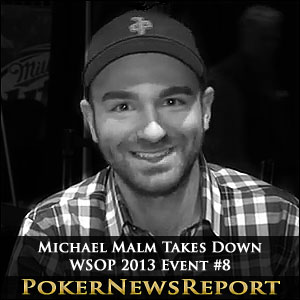 Michael Malm has proven that you don’t necessarily have to be good at every type of poker to win a mixed event. The 29-year-old marketing specialist openly admitted that he learned some of the games as he went along, and hardly had more than a basic understanding of the rules of the tournament. Apparently, Malm was a fast learner as he was able to overcome a final table laden with mixed games specialists, including two-time bracelet winner and last year’s runner-up Greg Mueller.

Amazingly, Malm overcame a nearly insurmountable seven-to-one chip deficit during his heads up battle with Steven Wolansky. An experienced veteran, Wolansky’s second place finish was good for over $139k. It was his biggest tournament score to date, as he typically only plays small buy-in events. Mueller, on the other hand, is no stranger to high buy-in tournaments, The poker pro has a myriad of six figure paydays to his credit, including a nearly $500k score from winning the $10k Limit Hold ‘em World Championship in 2009. He ended up finishing in third place, good for just under $90k.

Luck was on Malm’s side, as after falling way behind Wolansky, he managed to win small pot after small pot. But the turning point of the match was during a hand of Malm’s best game – No Limit Hold ‘em. In what amounted to a sick cooler, Malm three-bet with Kings and Wolansky called with King-Queen off-suit. The flop was K-9-T with two clubs giving Malm top set and Wolansky top pair with a gut shot straight draw and backdoor clubs. Not surprisingly, all the chips went into the middle on the flop, with Wolansky in utter shock. The Ace of clubs hit on the turn, giving Wolansky additional outs, but it was not to be as the deuce of hearts hit the river. On that hand, Malm secured the chip lead, and would never relinquish it.

Ironically, Malm wasn’t even supposed to play the event. After being too late to register for another event, he decided to give the mixed games tournament a go. No one expected Malm to make it past the first day, let alone win the title.

There’s an age-old adage in poker that says, Anyone can win. Michael Malm, through his recent victory in Event #8 has proven just that, and will serve as an inspiration to amateurs everywhere.