Phil Hellmuth has developed a reputation for coming second. Michael Craig has bested him in the Epic Poker League´s Charity Event in aid of Fallen Heroes USA. 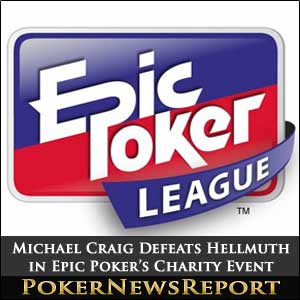 Phil Hellmuth has developed a reputation for coming second this year. John Juanda, Eric Rodawig and Brian Rast each denied him a twelfth WSOP bracelet in Las Vegas during the summer, and now Michael Craig has bested him in the Epic Poker League´s Charity Event in aid of Fallen Heroes USA.

This time however, Phil had a much better time – tweeting that he and his co-players were sitting around drinking scotch and helping to raise $25,000 for the charity which supports the families of police officers killed in the line of duty in America.

A Good Field Supports A Good Cause

45 players entered the charity tournament, which took place after the close of the Pro/Am qualifier into the Epic Poker League´s Main Event.

An Epic School of Fish

Between them, the 45 players managed to accumulate an additional 138 re-buys and 30 add-ons – with poker pro Randy Dorfman throwing in an additional $3,700 to top the total up to a round $25,000 – in less time than it takes to complete a regular single table Sit ´n´ Go.

Ultimately the winner was Epic Poker´s Editor-in-Chief, Michael Craig, who called Phil Hellmuth´s “desperate” shove (Phil was holding 450K chips against Michael´s 500K) with 10♥ 6♠ and caught the 10♦ on the flop to pair up.