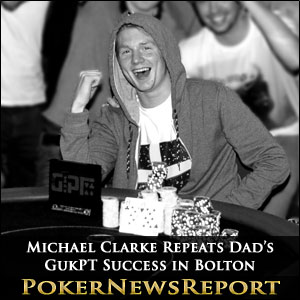 There were emotional scenes at the G Casino in Bolton this weekend, when Michael Clarke won the Grosvenor UK Poker Tour Main Event – emulating the success of his father, Brian, who won the GukPT Main Event in Blackpool in 2008.

Unlike his father, Michael had entered the final day and the heads-up as chip leader; but between times had been embroiled in a fascinating battle against Todd Robinson – one of the players Brian Clarke had faced when winning the 2008 Main Event!

With blinds of 4,000/8,000 (ante 1,000), the players at the foot of the leaderboard were looking for a quick double-up; but each of them was to fall within the first level of play. Martin Hogarty was the first to depart – shoving his A-K into the pocket Tens of Michael Clarke and missing all his outs.

Liam Batey was soon to follow – moving all-in with A-Q on a Queen-high board. Unfortunately for Batey, Todd Robinson had an easy decision to make having flopped a set of Nines, and Batey was bust in eighth – shortly followed by James Conway, whose pocket Threes were no match for the paired A-Q of Todd Robinson.

Clarke on the Swings of Fortune

The second level of the day saw Michael Clarke first extend his chip lead when rivering trip Sevens over the pocket Eights of Mark Dyson, before Dyson fought back to crack Clarke´s Aces with a 9-K Straight. Alan McLean and Kerry O´Connor both doubled up through Michael Clarke, and the former chip leader was reduced to 350,000 chips when Todd Robinson rivered a Full House to best Clarke´s trip Queens.

Robinson increased his chip advantage when his pocket Fives held to eliminate Kerry O´Connor in sixth, but Michael Clarke´s swing was once again in an upward direction; and he bust Don Alpert in fifth (A-J > pocket Fours) before sending Alan McLean to the rail in fourth in an incredible Royal Flush > Straight Flush hand.

Dyson Fails as Clarke Cleans Up

Despite Mark Dyson cracking Michael Clarke´s pocket Aces for a second time (this time a 7-Jack Straight), he was the next player to bust from the GukPT Bolton Main Event. As the game entered Level 22 (blinds 10,000/20,000 – ante 2,500), Dyson made a daring bid to improve his position with J♦ 10♦, but ran his last 450,000 chips into Michael Clarke´s Q♦ K♦ and, with no Jack or Ten appearing on the board, was eliminated in third.

With the chips from Dyson´s elimination, Michael Clarke took a chip advantage of 1.6 million -v- 1.2 million into the heads-up against Todd Robinson; who, despite winning the first showdown of the heads-up was soon under pressure from Clarke´s aggression. The final hand was a classic coinflip, with Todd Robinson moving all-in with A-9 and Michael Clarke making the call with pocket Eights. An Eight on the river settled the hand, and Michael had repeated the success of his father – who also hit a set on the river when he won in Blackpool – by winning a GukPT Main Event.

133 players entered or re-entered the GukPT Bolton Main Event – smashing the £50,000 guarantee and rewarding the top thirteen players. These are the payouts for those who reached the final table:-