MGM Sour on Poker-Only in Nevada

An MGM Resorts International gaming honcho has expressed dismay over Nevada’s online gambling scheme that is limited to poker-only. 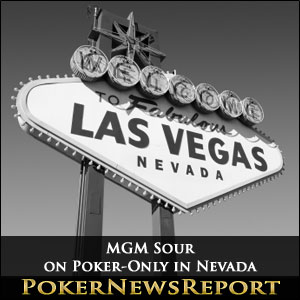 An MGM Resorts International gaming honcho has expressed dismay over Nevada’s online gambling scheme that is limited to poker-only.

Jim Murren, the casino’s chairman and CEO, recently said that MGM has not launched an online poker platform in the Silver State because the current set-up is not a profitable enterprise. There are just not enough players among the state’s residents and tourists to permit several online poker sites to operate in the black.

Currently, WSOP.com and Ultimate Poker are the only two regulated sites in Nevada. The pair have been waging a battle for market supremacy ever since Caesars launched on Sept. 19. Other sites are expected to also rollout their online offerings in coming weeks, which will further dilute the available player pool. Don’t expect MGM to be among them at this time.

Murren also told Vegas Inc. that Nevada missed the boat in failing to approve legislation that would offer online casino games in addition to poker. Citing Nevada’s status as the top gambling destination in the U.S., the CEO believes that steps should be taken by state officials so that Nevada can transition that industry-leading status to include the Internet.

The MGM rep’s comments don’t come as a total shock, as Nevada regulators and lawmakers are well aware that the state’s population of about 2.7 million is not large enough to run a viable online poker regime. For that reason, interstate compact regulations have been approved and Nevada is hoping to partner with Delaware and perhaps New Jersey once the online gambling launches of those states are in full swing.

But the fact that Nevada chose not to pursue legislation that would permit online casino gaming in addition to poker is still a bit baffling to many. The state’s gaming commission recently held a meeting and addressed fine-tuning the Internet gambling statute, but the agenda did not include discussions regarding adding slots, roulette, blackjack and similar games of chance to the mix.

Murren also stated that MGM has always been behind federal legislation for online poker. However, the likelihood of that continues to decrease daily and federal legislators have seemingly lost out on the opportunity as the state-by-state online gambling format progresses.

MGM has turned its focus to New Jersey’s Internet gambling launch set for November 26. A collaboration with Boyd Gaming and bwin.party will permit MGM to enter the online gambling realm in that state. But from the looks of things, MGM won’t be in a hurry to launch in Nevada until interstate compacts are in place and/or the Silver State amends it regulations to include online casino gaming.