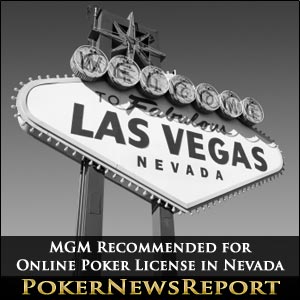 The rubber-stamped formal approval is expected later this month. MGM is one of the most well-known casino companies the world over and is second in revenue worldwide. Although MGM is preparing for licensing on an intrastate basis, the casino is one of many that would prefer that online poker legislation be approved on a federal level, rather than state-by-state.

We feel strongly that if it is in fact state-by-state, the states themselves need to compact with one another to create a more viable business model, MGM CEO Jim Murren told Reuters. Any one state going on its own presents an economic challenge, particularly in a small state like Nevada.

Those sentiments are echoed by many in the online gambling industry, but the odds of federal lawmakers approving such regulations this year is considered by a majority of industry insiders to be a longshot. A proposal has been drafted and circulated by Senators Harry Reid and Jon Kyl that may perhaps be introduced in the lame-duck session of Congress following the Nov. 6 elections. But to believe that enough support for the poker bill can be generated in less than two months before the legislative session concludes at year’s end is a bit optimistic.

There’s some very pressing issues for the country’s finances that remain in front of the Congress in the lame duck session, Caesars Entertainment chief executive Gary Loveman told eGaming Review. Caesar’s has also applied for a Nevada Internet poker license. It’s possible that the online gaming question will be called in that period, but I think it’s probably less likely rather than more likely, Loveman added.

MGM’s hearing before the control board was the first in which A.G. Burnett held the role of chairman, taking over for Mark Lipparelli, who resigned. MGM has a partnership agreement in place to provide online poker in a regulated U.S. marketplace with Boyd Gaming and Bwin.party — PartyPoker’s parent company. Boyd Gaming received approval from the gaming commission last week.

MGM hopes to join a dozen other companies who have already been formally approved by Nevada gaming officials. It was initially thought that South Point Poker would be up and running with the country’s first online poker site last month. But delays in testing and complying with requests of state officials has pushed back the debut of online poker in the Silver State. Late December or early 2013 is the latest projected timeframe in which Nevada residents and tourists can legally play poker online.