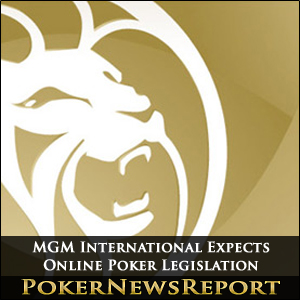 The world’s second largest gaming company, MGM Resorts International, expect the USA to pass online poker legislation this year – even though recent reports have suggested that is unlikely to happen.

Jim Murren, MGM’s chief executive officer, is certain federal laws will be in place before December 31 is out, bringing hope to players in the States that were already resigned to seeing another year pass without any real developments following the events of Black Friday last April 15.

As you will already know, the US Department of Justice (DoJ) closed several poker rooms last April – including PokerStars, Full Tilt Poker and Absolute Poker – when pressing charges of illegal gambling, money laundering and bank fraud.

This event led to calls for federally-legalised poker websites, although lawmakers have so far come up with little to promote positivity among online poker players within the USA.

But Murren remains confident that such legislation will be in place before 2013 – as many commentators have predicted – and is certain the Nevada-based MGM will be among the first companies to benefit through their partnership with hotel giants Boyd Gaming and online gaming firm bwin.party.

He spoke to London-based news agency Reuters about his hopes, saying that the arrival of the hoped-for legislation is “not easy, not because it is a complicated issue – it’s becoming a clearer issue – but because Washington is becoming more complicated”.

Murren also reiterated that MGM and their partners will “be one of the first horses out of the gate when it (legislation) is approved”.

Boyd Gaming CEO Not So Positive

However, Boyd Gaming chief executive officer Keith Smart is not so confident for this year, stating that he believes federal legislation is in fact “further off then we hoped”, while also suggesting that his company’s venture with bwin.party and MGM might have to first appear at state level.

He believes that “the best approach” is for the US Congress to endorse legislation that promotes “a national, well-regulated environment for internet gaming”, although he admitted that, while believing that “federal legislation is profitable”, Boyd Gaming will “consider entering the market on a state-by-state basis – if that’s how the issue plays out”.

Significantly, Smart added that Boyd Gaming have “already applied for an interactive gaming licence in Nevada”.

Remember, if you want to stay up to date with all the latest developments relating to [geolink href=”https://www.pokernewsreport.com/us-poker-sites”]US online poker[/geolink] – and so much more – make sure to bookmark Poker News Report now. You know it makes sense.