Merson and Lehr Left to Battle Out WSOP #57 Tomorrow

Gregory Merson and Keith Lehr will battle out the finale to WSOP #57 after time ran out on an exciting Day 3 which saw 27 bracelet hopefuls whittled down. 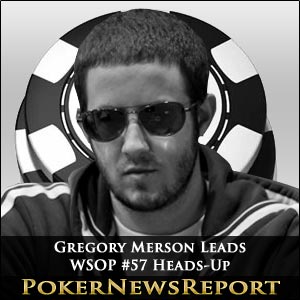 Gregory Merson and Keith Lehr will battle out the finale to WSOP #57 – the $10,000 buy-in No Limit Hold´em 6-Max – after time ran out on an exciting Day 3 which saw 27 bracelet hopefuls whittled down to just the final pair.

Maryland-born Merson has a 2:1 chip advantage over his rival from Louisiana but Lehr – with 14 WSOP cashes and one bracelet already to his name – has fought back well from a desperate position soon after the heads-up began.

By mid-way through the day, Keith Lehr got the boost he needed to take him up towards the top of the leaderboard. Holding A♥ K♥ he got all his chips into the middle against Stanislav Barshak´s 7♦ 7♥. The flop of Q♥ J♦ 5♠ provided Lehr with extra outs for the remaining two cards, and the 10♥ duly arrived on the turn to give him Broadway and a valuable double up.

As the game became six-handed, Keith Lehr took a massive knock from overnight chip leader Christopher Brammer, but he then stunned the rowdy rail into silence in two amazing hands to bust the popular Brit and put himself into the chip lead and in genuine contention for a bracelet.

In the first, Lehr (A♣ A♦) waited until the turn to get all his chips in against Brammer (J♣ 10♣) and was looking second best on a board of 8♥ 4♣ 8♣ / 5♣ until the 2♣ on the river gave Lehr a better flush. Two hands later Lehr took the remainder of Brammer´s chips when the Brit´s J♥ J♦ could not improve against Lehr´s Q♠ Q♦.

While Keith Lehr was making spectacular quads, river straights and top flushes, Gregory Merson was getting his quietly – at least for a while. Merson had started the day in a slightly better position with 518,000 chips and chipped up over the million mark with a turned straight against Frederick Jensen and trip Kings against Tony Hachem.  He moved up to over two million chips with some aggressive river play and the occasional bluff, and it was only when the game became 8-handed that the fireworks began.

Layne Flack was Merson´s first victim – coming second with 10♣ 10♥ against Merson´s A♦ K♠. Merson then took out Andrew Lichtenberger in sixth when coming from behind with A♦ Q♣ (v A♥ K♣) to turn a straight and extended his lead still further when he came from behind again with K♦ 7♠ to hit two pairs and eliminate Eddie Sabat (K♠ Q♠) in fourth.

Gregory Merson then turned his attention to Shannon Storr and, after a little duelling, Storr moved all-in from the small blind with 8♠ 5♠ against Merson´s A♦ 9♠. Neither player connected with the community cards and Storr was eliminated in third place – with Merson taking 8.7 million chips into the heads-up against Keith Lehr´s 5.5 million chips.

Play eventually ground to a halt for the evening, with neither man willing to make the mistake that would hand the title, the bracelet and the winner´s cheque of $1,136,197 to the other. Play will resume at 1.00pm local time and you can find out who emerges victorious by following Poker News Report.