The Merge Gaming Network has announced that it will no longer offer Bad Beat Jackpot (BBJ) tables once the current jackpot is hit. 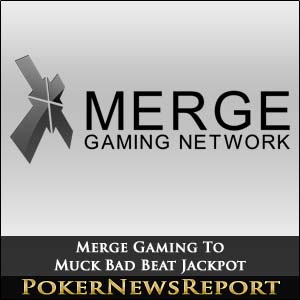 The Merge Gaming Network has announced that it will no longer offer Bad Beat Jackpot (BBJ) tables once the current jackpot is hit.

The decision to remove the feature was made to ensure a healthier poker room ecology, while providing players with a better ring game selection and increased players at the stakes the BBJ tables use to be, a Carbon Poker representative announced.

Carbon Poker is a top skin on the Merge Network. As of this writing, the BBJ is at more than $322,000 and once a player manages to hit the jackpot, the BBJ tables will close. Twenty percent of the jackpot is used as seed money to start a new jackpot. Since the promotion is ending, the seed money will be distributed to the winning players instead.

The BBJ promotion is somewhat popular among casual players but is typically avoided by more knowledgeable poker players who cringe at a casino-style game of chance played in tandem with the skill game of poker. A few networks and poker rooms still offer BBJ tables and the rules vary slightly from one network to the next but normally call for $0.50 of each pot to go to the jackpot that is won when a player loses a hand with four of a kind or better. At Merge, the requirement is quad 7’s or better. Both hole cards must be used and the hand must progress to showdown. Other than the seed money, 70% is distributed to players who were dealt hole cards and 10% is raked by the network.

Just being seated and playing at a BBJ table where the jackpot is hit allows players to share in the wealth of the jackpot. Of the 70% that goes to players, the loser of the hand receives 50%, the hand winner takes home 25%, and the remaining 25% is split by those at the table.

PartyPoker removed its BBJ tables in March and cited seemingly identical reasons as the Merge Network for doing so by striving for a healthier poker room, offering better cash games and more players to play against.

The BBJ at Merge climbed to over $1 million in January before being won by Eulson, who’s quad 7’s lost to the four ladies of 123maryc. The promotion is offered by some live casinos and Caesars Entertainment in Atlantic City paid out an $800,000 bad beat jackpot about one week ago.