The regulation of online poker in New Jersey and Delaware is being blamed for the Merge Gaming Network suspending players´ accounts in those jurisdictions. 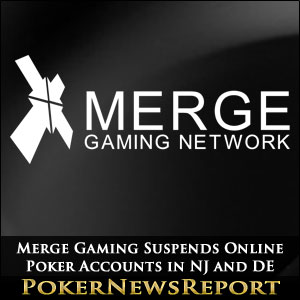 The regulation of online poker in New Jersey and Delaware is being blamed by the Merge Gaming Network suspending players´ accounts in those jurisdictions.

This weekend, hundreds of online poker players in New Jersey and Delaware tried to log in to play poker on their Merge Gaming skin (Carbon Poker, BetUSA, Sportsbook etc.) and discovered that their accounts had been suspended for “security reasons”.

After several players had contacted their site´s customer support, it became clear that the accounts were being suspended “as per restrictions set in your state” with no prior warning and with no procedures in place to facilitate the withdrawal of players´ bankrolls.

Players in certain states have been blocked from opening or operating Merge Gaming online poker accounts ever since Black Friday (New York, Washington, Maryland, Missouri, DC, Louisiana, Kentucky and Utah); and, although it has been possible for residents of Nevada who were existing Merge skin account holders to continue playing since online poker was regulated in the Silver State, it has not been possible for new players to open accounts on Merge skins for almost a year.

Now, Merge Gaming is complying with the legislation that was introduced to regulate online poker in New Jersey and Delaware, which explicitly prohibits the operation of an unregulated online gambling site. As one “old hand” on the 2+2 Poker Forum posted Merge probably doesn’t really have any say in the matter. Legalization is a double edged sword.

According to other contributors on the 2+2 Poker Forum, an email is supposed to be circulated over the next few days which will officially inform players from New Jersey and Delaware about the decision to stop providing a service in the two states and apologizing for any inconvenience. It is also hoped that more information is provided about how players can quickly get their hands on their bankrolls.

Some players, who did not have all their bankrolls locked up on one particular skin, have been trying to register accounts on regulated New Jersey online poker sites, and many are experiencing the geo-location issues which have plagued sites such as Party Poker and WSOP.com. Players from Delaware also have the problem that there is very little liquidity on their “home” online poker sites, and they may be driven to other networks such as Bovada, the Winning Poker Network or the Equity Poker Network.

Will Players on Other US-Friendly Networks be Affected?

However, it is not known yet whether the other leading US-friendly networks will follow suit and also withdraw from the New Jersey and Delaware online poker markets. Bovada Poker – which operates in many states where others fear to tread – simply state in their terms and conditions that:

You may only use the Services if you reside in a jurisdiction that permits you to place wagers on the outcome of sporting events, to download and to play casino, poker and other games, and to participate in poker tournaments.

Sites on the Winning Poker Network and the Equity Poker Network similarly put the onus on the player to determine whether they are legally allowed to play online poker, while the Bitcoin-exclusive poker site Seals with Clubs gladly accepts players from anywhere.