Select skins on the Merge Gaming network are implementing to only offer three attainable tiers. 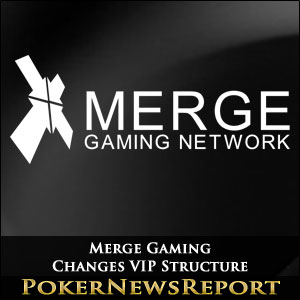 Select skins on the Merge Gaming network are implementing to only offer three attainable tiers.

Major skins on the Merge Gaming Network are implementing a new VIP schema. Featuring a reduced amount of tiers, harder to reach plateaus and an exclusive invite only tier, the new system was met by outrage among regulars who were saving up their precious points.

From this point forward both Carbon Poker and Aced will feature three tiers instead of six. The lowest tier, which is equivalent to the old “Wind” level, is now called Carbon. It will require players to accumulate 500 VIP points, as opposed to the old system which only required 100, and allow players to exchange their VIP points for cash at a 10% exchange rate.

The second tier, Carbon Plus, proves even more unappealing. Not only will it require 5,000 points per month to unlock (as opposed to 1,500 under the old system), the VIP –to-cash exchange rate has been drastically reduced. As a mode of comparison, the old VIP scheme allowed players who achieved “Water” status to trade points to cash at a 19% rate; the new Carbon Plus exchange rate is 15%.

Carbon Elite, the highest possible tier is invite only. The Merge Network does not specifically state how much a player would have to grind to be invited to this exclusive tier, only that players would be able to trade points in at a 35% exchange rate. The general assumption is that only a few dedicated grinders, if any, are going to achieve Carbon Elite. For all we know, it could be a myth.

Merge Gaming has made a series of questionable decisions this year, leading to significantly reduced traffic and a flurry of negative forum posts directed at its various sites. Since last year, traffic is down from an average of 100% to 40% of other US-facing sites.

After Lock Poker dropped out to join the rebranded Cake Network, the network increased its rake. More recently Carbon dropped their sponsored support thread from the Two Plus Two forums. This was done in response to players complaining that their tournament tickets expired. Way to deal with your problems Merge. Given its issues, its little wonder why traffic is down.

Merge’s apparent plan is to attract more casual players by providing terrible incentives to regulars. Not only is that one of the worst plans to stopgap its rapidly declining traffic, by not providing any extra incentive for casuals to sign up, new players will likely seek out sites with better promotions and higher volume. In fact, all Merge managed to achieve with its new VIP schema is to anger players who were relying on exchanging their points for cash.

Whether or not Carbon or Aced will allow these players to redeem their VIP points at the higher rate for a limited time is currently not known, but it doesn’t seem likely.