Brent Hanks has made fellow pro Jason Mercier “really happy” after producing an amazing display to win event #2 at the World Series of Poker (WSOP) in Las Vegas. 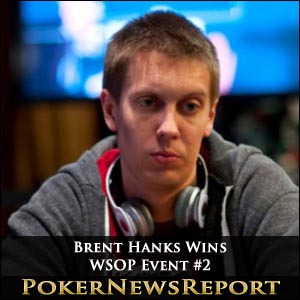 Brent Hanks has made fellow pro Jason Mercier “really happy” after producing an amazing display to win event #2 at the World Series of Poker (WSOP) in Las Vegas.

Hanks collected $517,725 for taking down the $1,500 buy-in No-Limit Hold’em tournament at the Rio All-Suite Hotel & Casino – but will have to share half of that with the Team PokerStars Pro from Hollywood, who has been backing the Vegas-based former online professional for almost four years.

Mercier is, of course, a very successful tournament player – having earned over $7.5 million in his career – but he also supplements his income by supporting other players, with former teacher Hanks among his favourites.

Hanks defeated fellow American Jacob Bazeley in their two-plus-hour heads-up clash to take the biggest share of the $2,836,350 prize pool that was created after 2,101 players entered the competition – and was immediately embraced by a delighted Mercier.

Quite right, too, as Hanks – who now has 12 cashes at the WSOP for a $932,244 total – had to battle back from holding just over one big blind during the event to ultimately overcome a stellar final table that included the likes of bracelet winners Andrew Badecker, Vanessa Selbst and JP Kelly.

The 29-year-old had made three previous final tables at the WSOP without success – finishing no better than fourth for $78,774 in last year’s $2,500 buy-in Eight-Game Mix event – so prompting Mercier to say that it was “pretty awesome” to finally see him break his duck at the world’s biggest and best poker festival.

But it’s not all business between 25-year-old Mercier and Hanks as they are in fact good friends, with the two-time WSOP winner pointing out that he would be “rooting for him” even if he didn’t have money invested in the first open event winner of the 43rd annual staging of the series.

Mercier – who is also staking Allen Bari and Dan O’Brien – added that he has wanted “to see him succeed” for a long time and is thrilled to see Hanks at long last “fulfill his dreams” with a first WSOP bracelet.

A strangely muted Hanks knows he has a good deal with Mercier – who plans to stake his friend for any No-Limit Hold’em event at the WSOP – but had been worried that the star would soon pull out of their agreement, pointing out that it had been “tough at first” when he struggled to convert good opportunities into success.

Now, however, Hanks has moved Mercier into profit on his investment after “getting further and further” into a hole when securing only “decent results”, while the newest WSOP champ also stressed that he is “really happy” to have earned “us both some money”.

Of course, Mercier enjoyed a highly profitable 2011 series when New Jersey’s Bari secured the $5,000 buy-in No-Limit Hold’em title for $874,116 – ensuring that half of that prize went into his pocket.

Still, after two successes, the one-time European Poker Tour (EPT) champion is keen for more, telling Card Player he is hopeful “this happens every year”, although he did include the caveat that he realises that “it’s pretty hard to with these big fields”.

Back to the actual event – and the final day started out with 15 survivors, although it didn’t take too long before the nine-handed final table was set.

California’s Richard Park was the first to exit in ninth place for $38,106, while Englishman Kelly soon followed him to the rail in eight for $49,621.

Thereafter, Michael Kaufman, of Massachusetts, exited in seventh for $87,231, Alaska’s Abdyl Konjuhi left with $87,231 for sixth and Vegas pro Ryan Schmidt picked up $117,921 in fifth.

Now down to just four players, Hanks faced up to Bazeley – the start-of-day chip leader – as well as Badecker and Team PokerStars Pro Selbst in the race for the crown and top prize.

Having only just doubled-up Bazeley, the former curtain salesman was extremely unlucky to run his 10♣ 10♦ into the Q♣ Q♠ of Hanks. The board ran out K♣ 7♠ 4♠ 3♥ A♣, so failing to improve either player and sending Badecker to the rail.

That elimination ensured that a new WSOP champion would be crowned, with Hanks starting his heads-up clash with Cincinnati’s Bazeley holding a chip advantage of 5,325,000 to 4,120,000.

Their head-to-head proved to be something of a marathon – with the chip lead changing back and forth on a number of occasions – but it all had to end eventually. The penultimate hand of the second WSOP tournament of this summer saw Hanks, on the button, open for 160,000, big blind Bazeley re-raise to 420,000, Hanks bet 780,000, Bazeley shove, and then Hanks call.

Eleven-time WSOP bracelet winner Phil Hellmuth also deserves a mention, with his 61st-place finish for $7,204 continuing his incredible run at the series to ensure he now has 86 cashes in Vegas. This latest cash also takes him ever-closer to the $8 million mark in earnings from the series.