Despite comments made recently by British poker pro James Bord that Americans are not as skilled at poker as Europeans, an analysis of the facts shows that nothing could be further from the truth. American poker players have dominated tournament poker since they invented it. 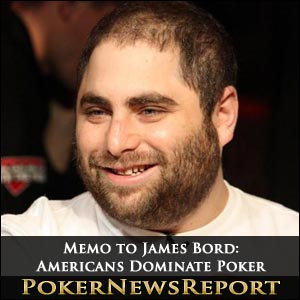 Despite comments made recently by British poker pro James Bord that Americans are not as skilled at poker as Europeans, an analysis of the facts shows that nothing could be further from the truth. American poker players have dominated tournament poker since they invented it.

In the World Series of Poker (WSOP), of the 936 bracelets awarded to champions, 794 are dangling from the wrists of U.S. players. On the World Poker Tour (WPT), Americans have come out on top more than poker players from any other country, winning 109 events. The same holds true in the European Poker Tour (EPT) with 12 American championships. There have been 35 WSOP Main Event titles awarded, 28 going to U.S. citizens. And when it comes to tournament winnings of all-time, 72 percent of the top 100 winners come from the land of the free and the home of the brave.

In 2011, Americans continue to dominate poker in every measurable category. Erik Seidel has doubled ($6.45 million) any other player in winnings. America’s Poker Brat, Phil Hellmuth, finished in-the-money at six of this year’s WSOP events, including three second-place finishes. Ben Lamb, with a bracelet and three final table finishes at the 2011 WSOP, including his position as one of the November Nine in the Main Event, is in the running for this year’s WSOP Player of the Year award. Should he win that coveted trophy, Lamb would become American’s seventh champion in the past ten years.

There are several standout European players that should be given their props. Bertrand “ElkY” Grospellier, from France, has amassed $8.5 million in winnings, including a WSOP bracelet this year, his first. German Max Heinzelmann, with runner-up finishes in both EPT Berlin and EPT San Remo is having a great year, as well as his fellow countryman Benny Spindler, the champion at EPT London. But they still have a long way to go to match the feats of American players.

Truth be told, poker has become more international in the last decade than ever before. There are a wide variety of worldwide tournament poker tours that weren’t around a few years ago. The WSOP has awarded more bracelets to overseas winners in the last few years and the 2011 Main Event is the first ever to not have an American majority seated at the final table. The rest of the world is starting to get noticed in the world of poker, but they are nowhere near running the tables as Americans have.

Prior to the 2011 World Series of Poker Europe Main Event, Bord stated, “I don’t think an American can win the bracelet, Europeans are now far superior. We used to look up to the U.S. players back in the day, but those days are now long gone. I’m prepared to put my money where my mouth is and refund any losing bets up to $500 if an American wins.”

Bord, the 2010 WSOPE Main Event champion, is a sponsored pro at Matchbook.com and made those comments to promote the bookmaking site and its new service allowing gamblers to bet for or against poker players in major poker tournaments. As we know, Elio Fox, an American, won the WSOPE Main Event of 2011 and Bord was forced to eat his words. As past history shows, betting on Americans to win future poker tournaments is a solid bet with the odds definitely in your favor.

Feel free to leave a comment with your thoughts.