The Winning Poker Network has released details of three Mega-Satellites guaranteeing a combined total of 110 seats into the High Five Main Event. 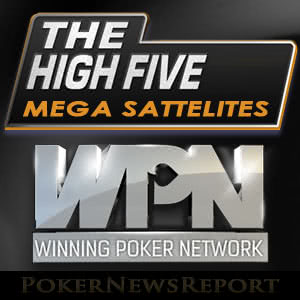 The Winning Poker Network has released details of three Mega-Satellites guaranteeing a combined total of 110 seats into the High Five Main Event.

Next Wednesday sees the start of the Winning Poker Network´s November High Five Series – a typically ambitious tournament series with more than $1.4 million guaranteed over twenty-five feature events. At the same time, the Network will be doubling the guarantees on its regular “Big 10” tournaments, taking the total amount of money on the tables over the five days of the series to more than $2 million.

As usual, the feature events in the November High Five Series are supported by a comprehensive satellite schedule; and, in order to enable as many players as possible to qualify for the $420,000 guaranteed High Five Main Event, the Network has announced three Mega-Satellites next Friday, Saturday and Sunday – with plenty more opportunities to qualify scheduled for this coming weekend.

Unlike some tournament series run by other networks, the Winning Poker Network´s November High Five series does not rely on one or two events to make up the series guarantee. Each of the five days of action features at least one tournament with a guaranteed prize pool of $50,000 or more, even though the series coincides with Thanksgiving and Black Friday (the shopping one, not the poker one).

The highlight of the series is the High Five Main Event. This $420,000 guaranteed tournament has a buy-in of $450.00 and gets underway at 4:20pm (all times ET) on Sunday 26th November. As usual there is an extended period of late registration (3 hours/12 levels), during which time eliminated players have the opportunity to re-enter. In addition to collecting a first prize in excess of $60,000, the winner of the High Five Main Event will also receive a sterling silver bracelet to commemorate their achievement.

Due to the buy-in for the High Five Main Event being beyond the bankroll of most players, the Winning Poker Network is hosting a massive range of satellite qualifiers starting with buy-ins of just $8.80. Special “On Demand” tournaments and a Steps qualifying program starting at $0.28 are also helping players to satellite into the High Five Main Event, and these are likely to qualify as many players for the target event as the Mega-Satellites scheduled for next Friday, Saturday and Sunday:

All three Mega-Satellites have the same $66.00 buy-in, and at present there are no sub-satellites or Freebuy sub-satellites scheduled feeding into the Mega-Satellites. If this situation remains the same, there may be an overlay in terms of more seats being available than the buy-ins justify. Players at [geolink href=”https://www.pokernewsreport.com/americas-cardroom”]Americas Cardroom[/geolink] and [geolink href=”https://www.pokernewsreport.com/black-chip-poker”]Black Chip Poker[/geolink] who are looking to use the Mega-Satellites as a route to the High Five Main Event are advised to keep an eye on the satellite lobbies in the poker software.

More about the Steps Qualifying Program

The Steps qualifying program can be found in the Sit and Go lobby. It consists of a six-step program of full ring Sit and Go games that players can buy-into at any stage ($0.28, $1.65, $6.60, $16.50, $55.00 and $150.00). Only the winner of the first Step is promoted to the next level (second and third placed players win the cash to try again), but thereafter a minimum of two players qualify for the next level in each subsequent Step, with both the first and second in Step 6 qualifying for the High Five Main Event.

It is worth checking out the Steps qualifying program over the coming weekend. Usually the action in the top Steps levels only gets underway in the days immediately before the target event, so it could pay to move through the earlier steps over the next few days to save yourself some money towards the end of next week. Whichever route you take into the High Five Main Event, good luck at the tables!