Mefodichev and Willerson Back for Fourth Day in WSOP #53

Vladimir Mefodichev and Neil Willerson will return for a fourth day to decide who will win the $1,500 buy-in No-Limit Hold’em event #53 at the World Series of Poker. 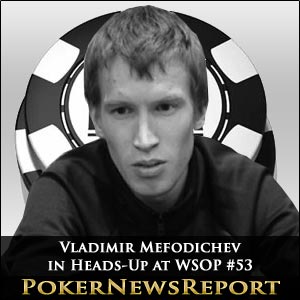 Vladimir Mefodichev and Neil Willerson will return for a fourth day to decide who will win the $1,500 buy-in No-Limit Hold’em event #53 at the World Series of Poker.

Russian Mefodichev ended Day 3 on 5,335,000 while San Antonio’s Willerson will start Day 4 on 8,920,000 after the 28 survivors from the original field of 3,166 were cut down to just these two players after 60 minutes of heads-up play at the Rio All-Suite Hotel & Casino in Las Vegas.

Willerson had started his head-to-head with Mefodichev way behind on 4.2 million chips to 10.5 million, but battled back to take the lead heading into what should be a short fourth day in the Pavilion Room of the Rio.

Tournament officials eventually brought Day 3 to a halt when they enforced the hard stop rule after 10 levels were played out to see Mefodichev and Willerson return today in the chase for the gold bracelet and $737,248 top prize.

The final elimination of Day 3 came with the exit of South Carolina’s Hugh Henderson in third place for $322,866 when he lost out to Willerson.

On the button, Willerson opened and small blind Henderson shoved all-in. Play folded back around to Willerson, who made the call to show 8♠ 8♣, while Henderson revealed A♣ 5♠ to be behind.

The 2♣ J♣ 9♥ K♥ 7♣ board failed to improve Henderson’s starting hand, so ensuring that Willerson and Mefodichev will battle it out for the jewellery later today.