There was no hanging around on the final table of the UKIPT Isle of Man Main Event as Duncan McLellan claimed a famous victory within four levels of play. 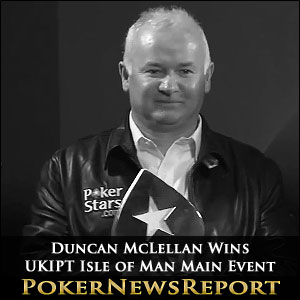 There was no hanging around on the final table of the UKIPT Isle of Man Main Event as Duncan McLellan claimed a famous victory within four levels of play.

The conclusion to the first-ever PokerStars event to be held on its home territory was a brief one, despite one of the most evenly stacked final tables in recent UKIPT history. The 379 entrants had been whittled down to just eight after three days of fascinating action and the chip counts at the top of the leaderboard were closely matched.

As the eight remaining players took their seats at the Villa Marina to battle out the conclusion to the Isle of Man UKIPT Main Event, the blinds were 12,000/24,000 (ante 3,000) and the relative chip stacks looked like this:-

The action on UKIPT Isle of Man Final Table started how it had finished on Day 3; with Jamie O´Connor, Duncan McLellan and Daniel Stacey battling each other in almost every hand that was dealt. McLellan was the early winner – taking a 640,000 chip pot from O´Connor with K♣ K♠ – before Jamie O´Connor recovered with a rivered pair of Kings against Daniel Stacey to get back up over the million chip mark.

Stacey took further hits to his chip stack when folding to post-river aggression by Christopher Jonat and Harry Lodge, and then doubling up Fatima Moreira de Melo A♥ A♣ > A♠ J♥. At the close of the first level of play, Christopher Jonat found himself at the top of the leaderboard when his A♣ 5♣ was good enough to take a substantial pot from Jamie O´Connor.

The first player to leave the final table of the UKIPT Isle of Man Main Event was Adam Topping. Topping had been very quiet during the first level of play, and had seen his chip stack dwindle down to 422,000 chips. A first unanswered shove at the beginning of Level 24 enabled him to pick up the blinds (15,000/30,000) and ante (4,000) but, on his next attempt, he ran his A♠ Q♦ into the A♠ K♠ of David Milne and failed to improve – leaving the event in eighth.

Meanwhile, Duncan McLellan had shot back into the chip lead courtesy of turning the nut flush in a three-handed pot against Jamie O´Connor and Harry Lodge. McLellan built on his lead when rivering a nut flush to take 695,000 chips from Christopher Jonat, and then bust Jamie O´Connor in seventh when coming from behind with a flopped Eight A♦ 8♦ > A♥ K♦.

Four quick eliminations followed to set the heads-up between Fatima Moreira de Melo and Duncan McLellan. De Melo sent Daniel Stacey to the rail in sixth when Stacey´s K♦ 7♦ ran into De Melo´s A♣ A♠, and he was quickly followed by Harry Lodge (A♠ J♥) when Duncan McLellan (Q♠ 10♣) connected with the 10♥ on the flop to make top pair.

Duncan McLellan increased his advantage at the top of the chip counts by first crippling, and then eliminating, Christopher Jonat A♦ Q♠ > K♣ J♠, and Fatima Moreira de Melo joined him in the heads-up after busting Richard Milne in third Q♥ Q♦ > K♠ 5♣. Still hoping to be the first woman to win a UKIPT Main Event, de Melo took 2.36 million chips into the heads-up against Duncan McLellan´s 5.13 million chips.

Heads-Up Over in Three Hands

The pace of the game did not slow down during the heads-up between Fatima Moreira de Melo and Duncan McLellan and the tournament was over in three hands. In the first, McLellan (6♠ 8♣) turned a small pair to best de Melo´s K♠ J♣ and, in the second, the two players chopped the pot after the board had delivered two pairs and an Ace kicker.

In the final hand of the UKIPT Isle of Man Main Event, de Melo moved all-in pre-flop with 5♦ 5♣ and McLellan (A♥ 10♦) made the call. The flop of J♠ Q♥ K♥ could not have been better for McLellan, who made a Broadway straight, while the Turn 2♣ and River 6♠ failed to raise a sweat for either player. Duncan McLellan had won the first ever UKIPT Main Event to be played on the Isle of Man and collected £94,090 for his victory.