With two days remaining in the PokerStars sponsored EPT San Remo Main Event, Chris McClung tightened his grip on the tournament and, at the end of Day 4, has a chip lead in excess of one million chips – equivalent to fifty big blinds. 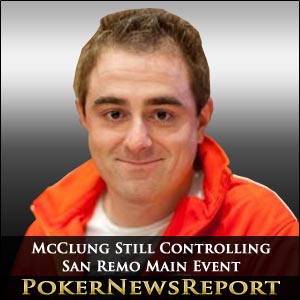 With two days remaining in the PokerStars sponsored EPT San Remo Main Event, Chris McClung tightened his grip on the tournament and, at the end of Day 4, has a chip lead in excess of one million chips – equivalent to fifty big blinds.

Australian Daniel Neilson and Italian Mustapha Kanit, who have been in McClung´s slipstream for the past couple of days, are among the twenty three players in hot pursuit of the Canadian poker player and the €800,000 first prize.

McClung is so far ahead of the field due a monster pot he took from Day 3 chip leader, Joseph Cheong. McClung had three-bet Mustapha Kanit to 104,000 pre-flop (blinds 10,000/20,000) and Joseph Cheong four-bet the Canadian up to 220,000. Kanit got out of the way and McClung (Q♥ 7♥) announced he was all-in. He was snapped called by Cheong, who turned over K♠ K♦. The flop of 4♥ J♥ 2♣ gave McClung four cards to a flush, but he was still behind. The K♥ on the turn was the card he wanted, but there was still a chance that Cheong might fill up. It was not to be as the 9♠ was a nice safety card on the river for McClung.

… and Bosses the Field

That 2.5 million chip pot came too late in the day for McClung to take advantage of it last night but, on the evidence of his play throughout Day 4, he will be looking to take advantage of his dominant stack throughout the rest of tournament. Coming into the day already with a substantial chip advantage, McClung was taking down pots uncontested all day. When players stood up to him, they were frequently sent to the rail, and even if they won small victories – those victories were only temporary.

It Is Not All About Winning …

Elio Fox heeded Gus Hansen´s “words of wisdom” in the recent WSOPE Caesar´s Cup about it not being all about winning the big pots but minimising your losses, as he stealthily negotiated Day 4. Possibly due to his status of WSOPE Main Event winner, Fox was getting away with some substantial pre-flop three-betting, but when he met with opposition did not take any chances. However, if Fox was trying to keep under the radar, he failed miserably due to a dealer mess-up.

… Although Winning is Good …

Shortly before the last break of the day, Fox had shoved his last 248,000 chips with 8♠ 10♠. Etienne Archambeaud had asked the dealer how much Fox had tabled and the reply came “two hundred eight”. Archambeaud (A♥ 8♦) re-shoved with his stack of 450,000 and was called by Richard Loth (A♣ K♣). The flop of 6♥ 7♥ Q♦ provided a few extra outs for Fox and the 4♠ on the turn added another for a chop. Fortunately, the chop was not a consideration after the 10♥ river – enabling Fox to triple up. However, that was not the end of the story.

… But You Want to Get Paid When You Do!

The dealer pulled 208,000 chips from Archambeaud´s stack and then another 208,000 to give to Fox. Fox was annoyed that he was getting short-changed by 80,000 chips, while Archambeaud was trying to point out to the dealer that he had taken two amounts from his chip stack and none from Roth, who himself was also fuming that he had been rivered for a 1.2 million chip pot. Eventually, the dealer returned one of the stacks to Archambeaud, paid off Roth and somehow Archambeaud was left with a spare 40,000 chips.

The Rise of Barny Boatman

Archambeaud´s second life was not about to last long, as soon after the furore had settled down from that hand, he shove the rest of his stack in with A♦ 4♣ against Barny Boatman´s 10♣ 10♠ and Elio Fox´s K♠ Q♥. The 10♥ on the river enabled the Boatman to get his stack up to a competitive level, which he then used wisely to double up again against Eli Bohbot´s Aces, when the Q♠ on the flop gave him a set. Barny is now up to sixth on the leaderboard and will joined in the final 24 by compatriot Jon Spinks.

Previously this week, Jon has regularly got off to a flying start and won substantial pots in the first few hands of the day. Yesterday however, a change in tactics saw him leave it until the last possible moment to make a move. In the penultimate hand of the day, he busted Richard Loth (K♦ 10♠) when his 9♠ 3♥ caught two pairs on the board, and then Jon eliminated Denys Drobyna in 25th to close the day´s proceedings – Jon´s Q♦ 10♣ pairing with a Queen on the flop to master Drobyna´s A♠ 6♦.