An emotional Ben Mayhew confessed to feeling “beaten up” after winning the PokerStars UKIPT Nottingham Main Event at the Dusk Till Dawn Poker Club last night. 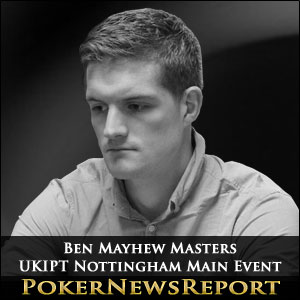 An emotional Ben Mayhew confessed to feeling “beaten up” after winning the PokerStars UKIPT Nottingham Main Event at the Dusk Till Dawn Poker Club last night.

There were emotional scenes at the conclusion of the PokerStars-sponsored UKIPT Nottingham Main Event last night, as winner Ben Mayhew admitted he had been lucky to win several all-ins that that he was not entitled to, and thanked his father – who passed away earlier this year – for delivering the right cards when he needed them.

Indeed, all of the action at the final table of the UKIPT Nottingham had been dramatic – with twists and turns that would be considered fictitious if the story of Ben Mayhew´s victory had been written as a book! Every player contributed something to the conclusion of the tournament and, throughout the whole of the final day, it was impossible to predict who would eventually win the event.

Let the “Beating Up” Commence

Ben Mayhew´s assessment that he was getting “beaten up” by the other players at the UKIPT Nottingham final table was pretty accurate. Tim Wong had shoved his small stack into him a couple of times and picked up the blinds and antes (15,000/30,000 – ante 4,000), before Tony Salmon´s post-Turn raise of 220,000 chips forced a fold from Mathew and started to put a little pressure on his chip stack.

Aido Only Knows One Way to Play – Wong Knows Another – Neither Are Right!

Anybody who has seen Sergio Aido play knows that he loves to be involved in as much as the action as possible, and it must have been eating him up inside that he hardly played a hand of cards throughout the first two levels. Eventually his impatience came to the fore, and he shoved his last 700,000 chips with A♦ 3♥ from the Small Blind into the A♣ Q♥ of Ben Vinson. Vinson´s superior kicker held, and Aido was bust from the UKIPT Nottingham Main Event in sixth place.

In complete contrast to Sergio Aido´s style of play, Tim Wong is the epitome of tolerance. Wong had nurtured his stack for almost three hours of play before finding a spot to shove 10♦ 7♦ from the button. Ben Vinson – who had just been forced out of a big pot by Ben Mayhew – made the call with Q♣ J♣, and was marginally behind after the flop of 10♣ 6♠ 8♣, but the Turn card 3♣ completed Vinson´s Flush draw and sent Tim Wong to the rail in a creditable fifth place.

Despite knocking out two players in a row, Ben Vinson was still the shortest-stacked of the four remaining players, and he declined the opportunity to make a deal when it was suggested to him by the others – even after he had doubled-up K♦ Q♥ > A♠ 9♠ against David Clifton-Burraway. Clifton-Burraway took another hit to his stack when doubling up Tony Salmon 10♣ 10♥ > 5♥ 5♦, but doubled back up against Ben Mayhew A♥ 5♣ > A♦ K♣ (Clifton-Burraway caught the 5♦ on the Turn) just as the blinds rose to 30,000/60,000 (ante 5,000).

Ben Vinson´s elimination from the UKIPT Nottingham Main Event was a two-handed affair which again was packed full of drama. Following the flop of 9♣ 7♠ 7♦, Vinson and Ben Mayhew got into a raising battle. Mayhew eventually moved all-in for his last 1.3 million chips, and Ben Vinson just about had him covered to make the call:

Ben Vinson was a 75 percent favourite to send Ben Mayhew to the rail, but the 8♣ on the Turn increased Mayhew´s outs and he spiked the 10♦ on the River to complete his gutshot draw and cripple Vinson. Vinson managed to double-up in the next hand, but was soon in the Big Blind again, and Ben Mayhew (J♦ 7♠) put Vinson (8♣ 6♥) all-in. The flop of 9♥ 5♠ 10♦ gave Vinson the opportunity for his own gutshot draw if he could spike a Seven and avoid an Eight, but the 10♥ and 4♠ completed the board to bust Ben Vinson from the tournament in fourth.

The game progressed with Ben Mayhew suffering an almighty blow to his chip stack when Tony Salmon (K♠ 9♠) paired his King on the River to reduce Mayhew to 1.5 million chips, and Mayhew was nearly out of the UKIPT Nottingham Main Event before the end of the level – getting all-in with A♥ 6♥ against the dominant A♦ 7♣ of David Clifton-Burraway and being lucky to catch a high card on the river which enabled him to chop the pot on a paired board.

Clifton-Burraway Out in Back-to-Back Hands

Ben Mayhew´s luck was getting to be unbelievable. After escaping from the chopped pot (above), he was all-in again – and behind again – against David Clifton-Burraway, A♥ K♦ -v- A♦ 8♥. Fortunately for Mayhew, the 8♦ landed on the flop, Clifton-Burraway failed to find the King he needed to win the hand, and Ben Mayhew doubled-up.

In the next hand, Clifton-Burraway shoved his remaining 1.4 million chips with J♠ 7♠ and Tony Salmon made the call with A♣ 6♣. The board ran A♥ 4♥ 3♥ / 7♦ / 6♥ to give Salmon two pairs and send David Clifton Burrow to the rail in third place.

Mayhew Comes From Behind to Take UKIPT Nottingham Main Event

Going into the climax of the UKIPT Nottingham Main Event, Tony Salmon held a 5.77 million -v- 3.39 million chip advantage over Ben Mayhew, and that advantage quickly increased to a 2:1 chip lead as Salmon won the early encounters in the heads-up.

Ben Mayhew recovered the early ground he had lost by shoving all-in on a board of 6♦ 10♦ 4♦ / K♦ when the pot already contained one million chips, and then took the chip lead when doubling up A♠ 6♥ > K♠ Q♥.

The final hand came just 15 minutes after Ben Mayhew had moved into the chip lead, when he moved all-in from the Big Blind with A♦ K♠ in response to a raise from Tony Salmon (6♣ 6♥) in the Small Blind.

The board ran 8♠ J♦ K♣ (to pair Mayhew´s K♠) / 5♦ / 8♣ and Ben Mayhew fell back from his chair onto the floor, and wept his eyes out with the relief of winning the UKIPT Nottingham Main Event after such an exhausting, and emotional, battle.