Officials for PokerStars, the largest online poker room in the world, have released a statement that they have added Russian poker player Maxim Lykov to their roster as part of Team PokerStar Pro and he will represent them in… 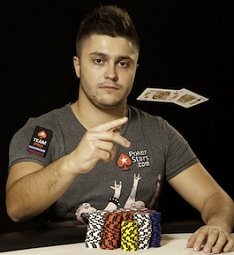 Officials for PokerStars, the largest online poker room in the world, have released a statement that they have added Russian poker player Maxim Lykov to their roster as part of Team PokerStar Pro’s and he will represent them in poker tournaments around the world.

Lykov has become a force to be feared within the online poker world and PokerStars were only too happy to reveal that the reign that the player has created so far came from two small deposits of only $40 in his player account.

Lykov began playing poker five years ago as a hobby to release from his stressful day time commitments of being an engineering student in his home town of Moscow.

During his five years of poker playing he has gone from strength to strength, improving his game with each and every session that he took part in until he was able to create what has been described as a ‘huge bankroll’ by the writers for the PokerStars blog.

Lykov has now become one of the highest earning live tournament players in Russia and he seems to bring that success to his time at the online tables. He is currently ranked 9th on the all-time live poker tournament rankings for Russia with $944,804 in winnings.

Lykov began his winning spree after taking down the Red Sea Poker Cup in 2009, winning $70,000 and since that moment he has continued to bring down some of the biggest names in the game to advance to strong finishes in some of he biggest tournaments in the game such as finishing third in the 2009 World Series of Poker $5,000 No Limit Hold’em event, cashing $145,000.

Not a player who likes to leave too much space between victories, Lykov added to his stats with a win this September during the Partouche Poker Tour when the tournament stopped in Cannes, France.

Lykov can be found playing poker on PokerStars under the screen name of ‘Maxim Lykov’, so be sure to stop by his table and watch the newest member of the PokerStars Pro roster in action.