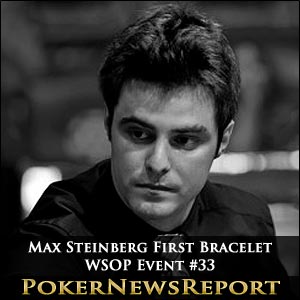 The third and final day of the $1,000 buy-in No-Limit Hold’em tournament in the Rio All-Suite Hotel & Casino started with just 14 survivors, but it was 23-year-old Steinberg who emerged triumphant – and with his first gold bracelet – after beating Swiss player Samuel Gerber in their heads-up clash.

It didn’t take long for the eliminations to arrive during the first level of play, while the nine-handed final table was set when Dutch player Vincent van der Fluit (11th for $25,331) and Russian Mikhail Timoshin (10th for $25,331) exited at the same time but on different tables.

North Carolina’s Christopher Shaw was the first to hit the rail from the final table, exiting in ninth place for $32,702 after just 20 minutes when his Jh-Jc were beaten by the Ad-Qd of Arizona’s Dylan Hortin after an ace arrived on the flop.

Play did, however, slow down for quite a while after Shaw’s exit, with pre-flop raises taking the blinds and antes. But, suddenly, a spate of eliminations arrived in quick succession as Russian Vitaly Meshcheriakov (eighth for $42,688) saw his A♠ K♦ bested by the 6♥ 6♦ of Gerber when the Swiss player hit his hearts flush on the river; Minnesota’s Ryan Laplante exited in seventh for $56,372 after his A♠ Q♠ failed to improve against Hortin’s J♦ J♣; Mississippi’s David Nicholson left in sixth for $75,314 when his A♥ 3♣ was beaten by the A♠ 6♥ of Hortin on a flop of 7♣ 6♠ 4♥; and Canada’s Joseph Marzicola was knocked out in fifth spot for $101,802 when his 2♣ 2♦ lost out to Vegas-based Matt Stout’s K♥ 7♥ when a king fell on the flop.

Dylan Hortin Knocked Out in Fourth

The aggressive Hortin was next to hit the rail in fourth place for $139,258. On the button, Steinberg raised to 110,000 and small blind Hortin shoved all-in for his last million. Big blind Stout folded and Oakland-based Steinberg took his time before calling.

Now down to just three players, Stout – who had enjoyed something of a rollercoaster day – was next to hit the rail in third place for $192,813. Stout, who had been left crippled from the previous hand, shoved all-in for his last 210,000, small blind Gerber called and big blind Steinberg raised.

Gerber folded as quickly as he could to allow Stout to reveal J♥ 8♥ and Steinberg to table A♦ Q♠ ahead of a board that read 2♠ 5♠ 4♣ 10♣ 5♣, which resulted in Steinberg’s ace high securing the knockout.

Tens Take It Down for Steinberg

Both heads-up players had previously finished as runners-up in WSOP events back in 2010, so weren’t new to this tense finale. Additionally, Gerber held only a slight advantage in chips of 4.4 million to Steinberg’s four million, ensuring we were in for a real battle.

Steinberg, though, edged clear of his opponent after only a few hands to set up his triumph that arrived about 90 minutes after their first head-to-head hand. The final hand saw Steinberg limp in from the button and big blind Gerber check his option.

An obviously disappointed Gerber quickly realised he was drawing to only two outs – one of the remaining fours – but was left even more frustrated when the A♠ turn and 9♣ river sent him out in second place for $273,385.