Max Silver leads Chris Moorman at the head of the tournament leaderboard of the WSOPE Main Event, with Andy Moseley, Jake Cody, John Duthie and John Eames among the chasing pack. 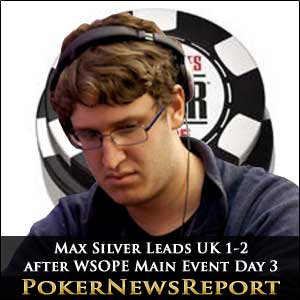 With two days to go, and 23 players remaining in the WSOPE Main Event, Max Silver leads Chris Moorman at the head of the tournament leaderboard, with Andy Moseley, Jake Cody, John Duthie and John Eames all among the chasing pack.

However, despite a quarter of the field now consisting of UK poker players, there is still a lot of poker to be played in this event and with Shawn Buchanan, Eric Seidel, Patrik Antonius and Tony G still in contention, a British victory is not assured.

The Day 3 action was fast and furious with the chip lead changing hands multiple times during the day. As well as Max Silver and Chris Moorman heading the leaderboard at various stages, Day 2 overnight chip leader Constant Rijkenberg lost and regained the lead on several occasions – often to Rifat Palevic, who tends to boss things during the middle of the day – and the mantle of chip leader was eventually taken by American female poker player Melanie Weisner (what a story that would have been!) before Amir Lehavot started his charge up the leaderboard at the expense of Palevic, with Rijkenberg and Weisner also busting out before the close of play.

As well as Melanie Weisner, three other female poker players started in the field of 115 that took their seats for the start of Day 3. It was good news for all four as Rebecca Mordoff (45th), Liv Boeree (36th), Weisner (33rd) and Mario Ho (27th) all safely negotiated the bubble and made their trip to Cannes worthwhile. Liv was particularly unfortunate to run her AJ into Jeremy Kottler´s AK towards the end of the day, and Mario Ho was even more unlucky – her 5♣ 5♠ holding up against Alexander Dovzhenko´s A♦ 9♣ until the A♥ was dealt on the river. Liv tweeted after her elimination that she is saving the best of her luck for next week´s EPT San Marino – the tournament which she captured last year to shoot her to poker stardom.

John Eames has a “Dovzhenko Day”

Alexander Dovzhenko was the player who miraculously turned three big blinds on Day 2 of the WSOPE PLO Championship into a fourth place finish, and UK poker player John Eames enjoyed almost a comparative day. Starting the day in 100th position (of 115 – 64 to cash), John got no callers on the first major hands he was dealt but was able to double up when his AJ paired on the board against 99. He lost a stack of chips to Chris Moorman (10♠ 10♦) when going in large with 9♠ 9♦ and was reduced to his last six big blinds when calling Giuseppe Sammartino´s shove (7♦ 4♦) with A♣ Q♣ and seeing Sammartino hit two pairs on the board. Fortunately John was able to double up against Chris Moorman when his Aces held against Moorman´s pocket Nines, and from there he was able to build his stack up to see him safely through the bubble and into the penultimate day.

Daddy Eames Gets it Right Too!

John Eames father – the enigmatic Tony G – also safely negotiated the bubble and picked up $100,000 from a bet he had placed on himself to cash in the WSOPE Main Event. The way the tournament is shaping up will also be of great joy to James Bord, who earlier this week claimed that European players were now better than the Americans and offered to refund any losing bets on the Main Event should an American win the title. With only seven US citizens left in the final 23 players who will take their seats on Day 4, Bordy looks to have the odds in his favour.

It would be a brave man who would bet out the outcome of the WSOPE Main Event and even the WSOP Player of the Year competition. Whereas it looked a two-horse race between Phil Hellmuth and Ben Lamb at the beginning of last week, Shawn Buchanan has now entered the reckoning with three cashes in the WSOPE supporting events and currently positioned in fourth in the Main Event. A good day today will see him take the lead in the Player of the Year competition and mean that Ben Lamb will have to run well in the WSOP November final table to catch him.