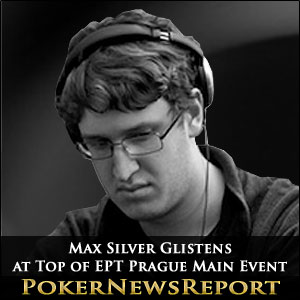 Max Silver heads the PokerStars-sponsored European Poker Tour Prague Main Event after an intense Day 4 which saw the field of 61 survivors reduced to a final 22.

Sixty-one players returned to the Hilton Hotel in Prague yesterday for Day 4 of the EPT Prague Main Event. Each of the players was already assured of a €13,200 payday, but each would have been hoping for the opportunities to help them progress towards Wednesday´s final table and the €889,000 first place.

At the head of the chip counts as play resumed was French poker player Ludovic Lacay; but – as forecast in yesterday´s PokerNewsReport – Lacay peaked too early in a major live poker tournament yet again, and was quickly reduced to an average stack by Max Silver (A♥ A♦ > K♦ K♠) before being dumped out of the tournament 10♦ 9♦ > A♥ K♦ by Ori Hasson in thirty-third place.

Max Silver´s decimation of Ludovic Lacay´s chip stack was the springboard for a hugely successful day in which he had to contend with two strong German players on his table for most of the day – Ole Schemion and Lasell King. King took the chip lead after Lacay´s demise when he eliminated Craig Burke K♣ K♠ > A♣ Q♣, but both Schemion and Silver took big pots from King to chip up themselves.

Schemion and Silver were also involved in some major confrontations with each other – Silver generally coming out on top and taking Schemion for ½million chips towards the close of the day when his J♦ 4♦ turned Trip Jacks. Silver also busted Piotr Pietrzak A♥ 10♥ > A♠ 9♦ in twenty-fourth place to close the day with 3,987,000 chips – 32 big blinds ahead of his closest rival.

It was also a good day for players who appeared at the final table of the Eureka Prague Main Event last week. Dmitri Holdeew – winner of the tournament – currently sits just outside of the top ten chip counts on the EPT Prague Main Event leaderboard after dominating his table. Holdeew sent Morten Klein (A♥ A♠ > K♣ Q♥), Dmytko Samoilenko (A♣ K♣ > A♥ 8♦) and Yury Gulyy (K♦ K♥ > Q♦ J♥) to the rail during the day, to bag and tag 1,200,000 chips at the end of Level 24.

Several places above Holdeew with 2,088,000 chips is Stephen Chidwick. Chidwick finished third to Holdeew in the Eureka Prague Main Event, and started Day 4 of the EPT Prague Main Event by turning a Queen-high straight to bust Artem Romanov Q♥ J♠ > A♦ 8♥. Runner-runner Trip Nines against Tiberu-Florian Georgescu helped Chidwick to move up among the chip leaders, and he concluded the day by eliminating Jonathan Roy A♥ A♣ > K♣ K♥ and finishing off Georgescu A♣ 9♥ > K♣ 10♠.

Looking Ahead to Day 5 of the EPT Prague Main Event

Day 5 promises to be a tight affair. With blinds starting at 15,000/30,000 (ante 4,000), only two players have less than 20 big blinds to work with and the average chip stack is 45 big blinds. The next player out is due to receive €29,600, with those that survive the day and make it to the final table assured of a €66,050 payday. Among those likely to be involved in Wednesday´s climax to the EPT Prague Main Event are:

Ole Schemion´s deep run in the EPT Prague Main Event has made him favourite to finish 2013 as the Global Poker Index´s Player of the Year. Currently Schemion is lying in fourth place on the index behind Daniel Negreanu (who sulked home to Canada because the Internet was not working in his hotel), Philipp Gruissem (last seen in Macau playing high stakes cash games) and Marvin Rettenmaier (who is across town competing in the bwin WPT Prague).

Schemion needs to finish in seventeenth place or higher in this event, and hope that Rettenmaier does not perform well at the WPT Prague, in order to take the lead in the race for the GPI Player of the Year title – a lead he is probably going to keep, as it is unlikely that neither Negreanu, Gruissem or Rettenmaier will compete in the final GPI ranking tournament of the year in Sweden (The Christmas Poker Week Event in Gothenburg).