Max Altergott was a big loser despite winning the Aussie Millions Challenge, having reluctantly agreed to a five-way chop of the prize money at the final table. 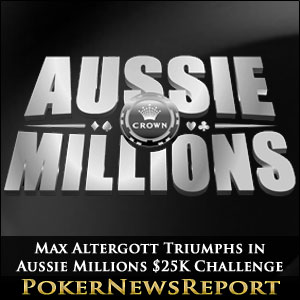 Max Altergott was a big loser despite winning the Aussie Millions Challenge, having reluctantly agreed to a five-way chop of the prize money at the final table.

There was an unusual conclusion to the Aussie Millions $25K Challenge last night, when the final five players agreed to split the prize money according to the ICM and then increase the blinds with each orbit of the button to accelerate the conclusion of the tournament.

The deal was done only after Max Altergott – the only dissenting player – was persuaded to agree to it by Jason Mercier; and the German high stakes superstar will probably be kicking himself this morning after being talked out of a AU$460,000 payday (he collected AU$241,785 instead).

Thirty players returned to the Crown Poker Rooms in Melbourne on Day 2 of the Aussie Millions $25K Challenge after a record-breaking entry of 65 players had created a massive AU$1.56 million prize pool. Only eight players were going to cash in the tournament, so the primary goal when the cards were in the air was to survive the early levels.

That plan did not go too well for 2005 WSOP Main Event winner Joe Hachem, who had his Aces cracked in the first level of the day when Dan Shak (K♠ Q♦) rivered a Diamond Flush; and John Juanda soon joined Hachem on the rail when his Q♠ 2♠ flopped top pair, but a Nine on the flop also made a set for Scott Seiver (9♥ {9♦).

Dan Shak completed a second Diamond Flush > pocket Aces KO when his 9♦ 6♦ was responsible for busting out Jeff Rossiter, and his good fortune continued when he took half of Benny Spindler´s stack with a rivered Full House.

The field was reduced to twelve players when Ole Schemion bust Max Lehmanski 10♠ 10♥ > A♣ 8♣, and there was just time before the dinner break for Jason Mercier to eliminate the overnight chip leader Fabian Quoss A♦ J♦ > A♣ Q♠ when he rivered a Broadway straight.

Yan and Schemion Out – Spindler is the Bubble Boy

David Yan had been flirting with the chip lead during the early levels of play, but his stack had deteriorated during the day and he was bust in eleventh place when his pocket Tens failed to improve past Martin Jacobsen´s pocket Jacks.

Ole Schemion was bust by Jason Mercier Q♦ Q♠ > 8♣ 7♠ after Schemion´s attempted bluff against Dan Smith resulted in failure, and Benny Spindler was reduced to the short stack due to being crippled by Tobias Reinkemeier 10♥ 10♦ > 9♠ 9♣.

Spindler made a brief recovery – flopping a straight with J♥ 9♠ to triple up against Jason Mercier and Scott Seiver – and doubling up against Reinkemeier K♦ J♣ > Q♣ J♥, but a rivered straight by Max Altergott stopped Spindler´s recovery in its tracks and sent him to the rail in ninth place.

Three More Fall before Deal is Made

It took nearly two hours for the eight-handed final table to be reduced to five players. Tobias Reinkemeier was the first player to bust in the money when his A♦ K♣ failed to connect with the board and he was eliminated in eighth by Jason Mercier´s Q♠ Q♦.

As Shak departed from the table, the five players considered a split of the prize money. All except Max Altergott agreed to an ICM split, but after a little persuasion from Jason Mercier the deal was finally set. The pattern of play was also changed – so that the blinds (which were currently 8,000/16,000 – ante 2,000) would increase with each orbit of the button.

Despite the player´s change to the format and the prize money deal, there were no rash decisions being made. Max Altergott doubled up through Scott Seiver on the second orbit of the button A♥ Q♦ > J♠ J♣, and Seiver was subsequently eliminated by Jason Mercier 2♠ 2♥ > J♠ 6♦ on the next orbit.

Mercier then crippled Martin Jacobsen A♦ 10♠ > A♣ 7♣, before Jacobsen was sent to the rail in fourth place by Dan Smith K♥ 3♥ > K♣ J♦; but Jason Mercier´s participation in the Aussie Millions $25K Challenge was brought to an end by Max Altergott, who called Mercier´s pre-flop shove with 10♥ 8♦, and caught an Ace on the Turn to pair his A♥ 9♥.

Going into the heads-up, Max Altergott had a 1.75 million -v- 1.20 million chip advantage over Dan Smith, and all the chips went into the middle in the first hand of the tournament climax.

Smith was hoping for a miracle after the flop of A♣ 8♦ 8♣, but it failed to arrive on the Turn (K♦) or River (9♦) and Max Altergott had won the Aussie Millions $25K Challenge.

One of the reasons for the deal being made was the lateness of the hour. It had already gone past 2.00am local time in the Crown Poker Rooms when the split of the prize pool was agreed, and the five remaining players would not have wanted a really late finish on the morning of the Aussie Millions Main Event Day 1C – their last opportunity to get involved in the headline tournament of the series.

You can see if the relatively early night helped any of the players to progress through the early stages of the Aussie Millions by following @PokerNewsReport on Twitter.