At the end of Day 1A, Paraguayan player Mauricio Baez leads the £1 million guaranteed UKIPT Nottingham Main Event ahead of some accomplished UK poker players. 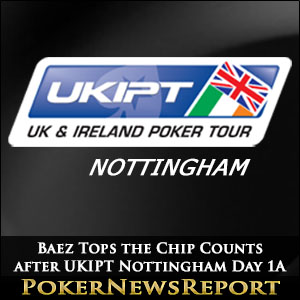 At the end of Day 1A, Paraguayan player Mauricio Baez leads the £1 million guaranteed UKIPT Nottingham Main Event ahead of some accomplished UK poker players.

There was a promising start to the £1,100 buy-in UKIPT Nottingham Main Event, as 175 players took part in the first of three opening Day 1 flights at the Dusk till Dawn poker club in Nottingham – reducing the prospect of an overlay in the £1 million guaranteed tournament.

Other notable players to make it through the initial opening flight include EPT Barcelona Main Event Champion Tom Middleton (87,500 chips), Triple-Crown winner Jake Cody (70,000 chips), and David Clifton-Burraway (25,200 chips), who had led the last UKIPT Nottingham into the final day before being eliminated in third by eventual winner Ben Mayhew.

Those Who Will Have to Try Again

Being a re-entry event, players who bust out on Day 1A have the opportunity to re-enter today or tomorrow Those who might want to take advantage of a second opportunity include Sky Poker´s Julian Thew – whose (7♣ 9♠) two pair ran into Jason Shellum´s (10♦ 8♦) Jack-high straight – and GukPT Blackpool winner Richard Trigg, whose K♣ Q♠ failed to find the overcards he needed to improve past Tom Middleton´s pocket Jacks.

We also mentioned in yesterday´s PokerNewsReport that a strong Irish contingent were expected to take part in the UKIPT Nottingham Main Event, and early birds from across the Irish Sea included perennial online qualifiers Daragh Davey, David Lappin and Dara O’Kearney. All three bust early in the proceedings, but fortunately more online satellites were available on PokerStars last night, as well as a couple of live qualifiers at Dusk till Dawn.

Looking Ahead to Day 1B of the UKIPT Nottingham Main Event

Ten more levels of action will take place at Dusk till Dawn today, when we will see the likes of PokerStars Team Pros Chris Moneymaker and Christophe de Meulder taking on the UK´s finest. Looking at the numbers of players pre-registered for the second opening flight, the capacity field of 450 players is likely to be reached; and, with Dusk till Dawn already maxed-out for Friday´s Day 1C, today might be the last opportunity for many players to progress to Saturday´s Day 2. Those with no such worries (and two days off) include: