Event 23 of the 2013 World Championship of Online Poker ended with over $533k going to the winner. 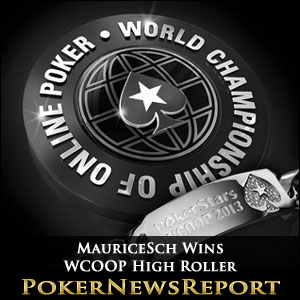 Event 23 of the 2013 World Championship of Online Poker ended with over $533k going to the winner.

This year’s WCOOP has already featured big buy-in events, even bigger payouts and extraordinary large prize poosl. But Event 23, the $10,300 NL Hold’em $2 million guarantee topped them all. Drawing a rather large field of 276 runners, 22 of whom would rebuy, the event crushed its guarantee by nearly $1 million and would pay out over half-a-million to the lucky winner.

That winner would be a player who goes by the online name of “MauriceSch.” Before earning the top spot, “MauriceSch” would make a deal with second place finisher Martin “M.nosbocal” Jacobson. Jacobson would take home $480,000 for his efforts.

In other news, Event 24 – $700 NL Hold’em ($1.5 million) drew almost 3,500 participants, resulting in a prize pool that nearly surpassed the one from Event 23. Of note, highly-regarded professional Jason Mercier would reach the final table, ultimately falling in third. A player who goes by the name “vovamillion” would ultimately win the tournament and $271,889.75 in prize money, as well as the coveted WCOOP bracelet. When play was down to four-handed, the remaining participants struck a deal which set aside $30,000 for the winner.

Finally, in what amounted to the largest field of the weekend, Event #22 – $215 NL Hold’em ($1.25 million guaranteed) drew a massive 9,394 player field. When the smoke cleared, Jonathan “iftarli” Jaffe would win his unprecedented third WCOOP title. He would have to defeat a tough opponent in Miguel “LOL_U_91” Use in order to claim the prize. However, the two did strike a deal before playing heads-up. Use won nearly $227k for his second place finish.

Stay tuned for more results from this year’s WCOOP, here at PokerNewsReport.com.