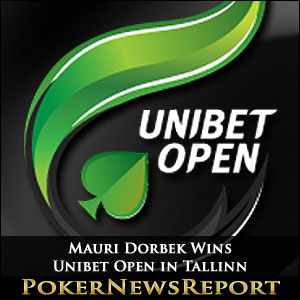 The first ever visit of the Unibet Open to the Estonian city of Tallinn was a remarkable success. 262 players ponied up the €1,100 buy-in (or qualified online) for the Main Event, which was complemented by a full schedule of side events and an astonishing player´s party.

After two opening flights, 114 players carried forward chip stacks into Day 2; and late into the second day´s action the money bubble burst – Ronnie Espensen´s Queens improving to Full House to eliminate both Maksym Lavrov (A♥ K♦) and Indrek Stranberg (J♥ J♣), and assure the thirty-two remaining players of a €2,000 min-cash.

Following the post-bubble rush to the Cashier´s desk, fifteen players returned to the Casino Olumpia on Sunday to compete in the final day of the Unibet Open Tallinn. The nine-handed final table was set within four hours, with former Unibet Open Troia winner Dmitry Varlamov having a huge chip advantage after cracking pocket Aces with Kings to knockout Evgeniy Zhadan in fifteenth place, and then sending the big-stacked Aleksandr Konstantinov to the rail in tenth place A♦ A♥ > 3♦ 3♣.

The top heavy Unibet Open Tallinn final table got underway with the game entering Level 24 (blinds 20,000/40,000 – ante 5,000) and, with two-thirds of the final table having fewer than twenty big blinds, there was no waiting for the action to develop.

Dmitry Varlamov took control of a third of the chips in play when eliminating Vladimir Fedorov in ninth place A♠ Q♠ > J♦ J♥, and actually extended his advantage over Andrejs Perederejevs by default – as both Rein Koov and Lauri Meidla doubled-up through Perederejevs to ladder up the pay scale.

Koov dispatched Juha Rasku to the rail in eighth place 10♥ 10♠ > A♣ Q♥, and Rasku was soon joined by Adam Magnusson – who had the misfortune to run his Q♦ Q♠ into Lauri Meidla´s K♥ K♣ to finish the tournament in seventh place.

As the blinds increased to 25,000/50,000 (ante 5,000), Andrejs Perederejevs gained his revenge on Rein Koov for the earlier double up by eliminating him in sixth place Q♥ Q♣ > A♠ J♠, but it looked like there was no catching chip leader Dmitry Varlamov, who once again found Aces to bust Robert Sevtsenko in fifth place A♥ A♦ > A♣ Q♣.

Up until this point, eventual winner Mauri Dorbek had been practically anonymous. A double up against Varlamov kept his chip stack over ten big blinds, and a second double up against Lauri Meidla enabled him to remain competitive. Nonetheless, he was still the shortest-stacked on the three remaining players after Perederejevs had rivered a flush to eliminate Meidla in fourth place K♠ J♠ > K♣ Q♣.

Perederejevs Straightened Out as Varlamov Leads into Heads-Up

The pivotal hand in the Unibet Open Tallinn Main Event came when Andrejs Perederejevs moved all-in with A♥ J♦ and Mauri Dorbek made the call with A♣ Q♣. Dorbek was ahead when the cards were on their backs, but the flop of 10♣ J♠ 8♥ made Perederejevs a slight favourite to win the hand with his paired Jack. However, the K♥ on the Turn gave Dorbek a Broadway straight, and Perederejevs was crippled when the 9♥ blanked for him on the River.

Perederejevs’ chip stack was reduced to less than one big blind which went in on the next hand with 10♣ 2♣ against Varlamov’s 10♠ 7♦ – which flopped a Ten-high straight and sent Perederejevs to the rail in third place. Varlamov took a 4.95 million -v- 2.8 million chip advantage into the heads-up against Mauri Dorbek, but Dorbek immediately doubled up into the lead and started to apply the pressure – reducing Varlamov´s stack to 1.3 million chips by the time the final hand came around.

In the final hand, Dmitry Varlamov moved all-in from the button with Q♣ 7♦. Mauri Dorbek looked down at his 9♦ 9♥ and made the call. The flop of A♠ 8♥ 6♥ kept Dorbek ahead, but although the 9♣ on the Turn gave him a set, Varlamov was still alive with an open-ended straight draw. Fortunately for Dorbek, the 8♣ on the River improved his hand to a Full House, and the Tallinn local had won the Unibet Open for €55,500.