Twenty-seven players remain in The Grand Live Tallinn Main Event after a brutal Day 2 in which the required 38 players were eliminated in less than 4 levels. 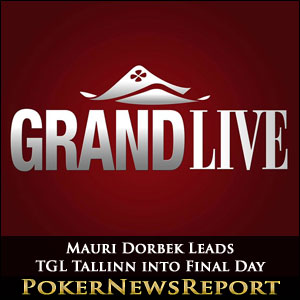 Sixty-five players returned to the Swissotel in Tallinn yesterday to compete in Day 2 of The Grand Live Main Event, with the plan being to continue play until just twenty-seven players remained. Grand Live events frequently attract a number of aggressive players, but nobody expected the day to come to its conclusion twenty minutes before the scheduled dinner break!

At the end of the carnage, Estonian players dominate the leaderboard; with Mauri Dorbek (fifth on the all-time Estonian money list) being the only player to bag and tag in excess of 200,000 chips, and Madis Muur (top of the all-time Estonian money list) lurking menacingly in third spot. Two more Estonian players appear within the top ten chip counts (below), and it may take something special from one of the other players to deny a home victory.

The Grand Live Tallinn Main Event resumed in Level 9 with blinds of 400/800 (ante 100) and with the average chip stack being 36,300 chips – enough for a fairly sedate start one would imagine, but this was not to be the case. Due to either bad luck or bad judgement eleven players bust from the tournament within the first hour.

Mauri Dorbek was one of the biggest gainers during the opening exchanges – crushing Mantas Urbanos A♠ Q♣ > K♠ K♥ with a backdoor Ace-high flush – and Torsti Kettula also hit four cards of the same suit to bust Kaisa Suorsa A♥ 10♠ > K♣ 10♥. As the blinds increased, the speed at which players were busting from the event start to decline – but not by much!

Efthymiou Nikolaos left the tournament when his 10♥ 10♠ failed to improve past Mauri Dorbek´s J♦ J♠, and Dorbek then bust two players in the same hand – his pocket Queens flopping a set (and improving to a Full House) against Vadim Guk (3♥ 3♠) and Eduard Kruglov-Arutiunan (8♦ 8♥).

A big 100,000 chip pot between Madis Muur and TGL Malta Champion Jimmy Rasmussen saw Muur race up the leaderboard. Rasmussen had moved all-in with pocket Fives following the flop of 4♥ 5♦ 6♦, but Muur had been dealt the 7♦ 8♠ for an Eight-high straight to bust the former champion and, when Mauri Dorbek flopped a set of Tens to eliminate Vallo Maidla in twenty-eighth place 10♥ 10♦ > J♣ J♠, play was stopped for the day.

With The Grand Live Tallinn attracting 118 entries, only the top fifteen players will walk away from the Swissotel in Tallinn with money in their pockets. Consequently the early action on Day 3 is unlikely to be as frenetic as it was on Day 2. When play was halted last night (actually around 5:00pm in the afternoon), twenty minutes remained in Level 12 (blinds 800/1,600 – ante 200).

Only two players have less than twenty big blinds – Apostolos Lanopoulos (19,000 chips) and Dimitris Koyrzis (17,600 chips) – so it could be quite a subdued pace while we wait for twelve players to bust before the money bubble is burst. Those we expect to be involved at the business end of the action include: