Mattias Kurschner heads the field in the Grand Live Prague, which combined both Day 1s into a single flight due to the success of the Eureka Prague Main Event. 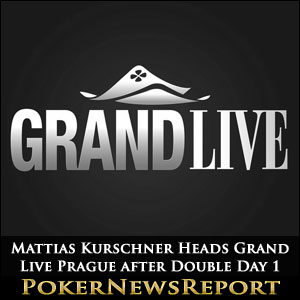 Mattias Kurschner heads the field in the Grand Live Prague, which combined both Day 1s into a single flight due to the success of the Eureka Prague Main Event.

The Grand Live Main Event in Prague got off to a delayed start yesterday after the decision was made to scrap the scheduled Day 1A due to so many players still being involved in the Eureka Prague Main Event.

When Day 1B got underway, late registration was kept open for the first six 60-minute levels of the €1,100 buy-in tournament, and ultimately the Grand Live Prague closed its books with 298 entries.

At the close of play, Mattias Kurschner had bagged and tagged 168,000 chips and has a lead of seven big blinds over Atanas Kavrakov (161,000 chips) going into Day 2 of the four-day event.

Patrick Rosskamp can consider himself unlucky to be the first player to be bust from the Grand Prague Live after getting all his chips in with A♦ K♠ on a King-high flop, and running into Daniel Ljung´s A♥ A♣. Niklas Toorell also thought he had found the right spot to get his chips committed to the pot when his 9♠ 9♦ flopped a set; however, Eva Jiretorn (Q♥ Q♦) had flopped the top set, and Toorell was out of the tournament at the start of Level 2.

Two other players were early eliminations in hands involving pocket Queens. In the first, a player moved all-in with pocket Queens on a flop of K♦ 8♠ 10♦ and was snap-called by Kristian Svensson (10♠ 10♥). Svensson´s set improved to Quads on the River and the unknown player quickly disappeared – soon to be followed by Matej Kokalj, who had moved all-in with K♣ K♠ on a Ten-high flop, and received a call from Unibet Cannes Open winner Quentin Lecomte (Q♥ Q♠). The Q♣ on the Turn gave Lecomte a set and sent Kokalj out into the cold Prague evening.

Adams Chips Up Into Contention

For many of the UK contingent visiting Prague at present, their focus is on the forthcoming EPT and WPT events; however, Matt Adams is looking to achieve what has never been done in Grand Live tournaments before – win back-to-back titles. Adams won this event last year (when it was called the “Grand Series of Poker/GSOP) and he made a bold start to retaining his title with a hero call just before the dinner break which put him among the chip leaders.

With blinds of 150/300 (ante 25), Jorma Nelgard had raised from the button to 900 chips with J♠ 5♠. Adams in the Big Blind raised the pot to 2,700 chips and Nelgard made the call. Following the flop of Q♣ 8♠ 8♣, Adams acted first and bet out 3,200 chips. Nelgard called, and was the aggressor following the 10♦ on the Turn – raising the stakes to 5,500 chips. Adams called, and checked again after the 2♦ was dealt on the river. Nelgard moved all-in for his last 21,000 chips and, after a moment´s thought Adams made the call – his Ace-King being good enough to see off Jorma Nelgard and his attempted bluff. Matt Adams finished the day with a healthy stack of 106,100 chips.

106 players survived the nine levels of play on the Double Day 1 and will return to the Card Casino in Prague this afternoon to face blinds of 500/1,000 (ante 100) . Play will continue until just thirty-six players remain in the Grand Live Prague Main Event – those thirty-six all being assured of a €2,600 min-cash.

There is a first prize up top of €61,425 for the winner and – although it is still early days – those in the best positions to claim that prize include: