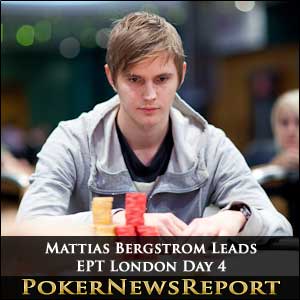 Bergstrom leads by less than one small blind from Spain´s Adria Balaguer, with German qualifier, Pascal Hartmann, just one big blind back in third.

Plenty of Experience in Chasing Pack

The three “new” boys will be looking back over their shoulders through the early stages of Day 5, as seasoned veterans of the European Poker Tour attempt to take the lead in the race for the £750,000 first prize. Among them in Spanish PokerStars sponsored Pro player Juan Manuel Pastor, for whom this will be his first cash on English soil since 2007, and Portuguese poker star Joao Barbosa – who is the last previous EPT Main Event winner left standing.

Although more than a quarter of the players in the field at the start of Day 4 were UK poker players, (16 of 62), by the end of the day we were down to our last four (of 24). Overnight chip leader from Day 3, James Mitchell, still holds a handy position in sixth; while Martins Adeniya took the chip lead mid-way through the day to see it whittled away by Mattias Bergstrom, and finished the day in ninth position. The UK´s other sole survivors are Ben Jenkins and Fowzi Baroukh, who are placed 20th and 23rd respectively.

Two-Thirds of the Field To Go Today

Day 5 of the EPT London Main Event will play down until the final table of just 8 players remain. If the action is as fast and as furious as it has been on the last three days, there should be time for a picnic in the park some time around tea. The first player out today will collect a payday of £16,000, while an appearance on the final table guarantees the players who return tomorrow a minimum of £65,000. Those in the best position to reach the final table are currently:-