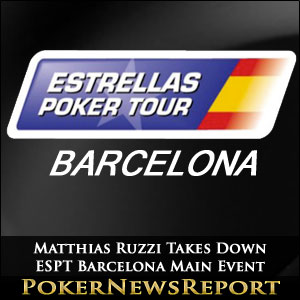 The climax of the ESPT Barcelona Main Event may have been over quickly, but it was full of twists and turns throughout the final day. Matthias Ruzzi somehow managed to win the event after starting the day with just fourteen big blinds, but his triumph was far from assured during the first five hours of action.

Ruzzi collected €198,550 for his victory, and although his name will forever be recorded as the winner of the 2014 ESPT Barcelona Main Event, Vladislav Donchev was the biggest winner of the day – collecting €278,550 for finishing in second place after a four-way deal was agreed at the final table. However, at the start of the final table, it would have been a brave man to select Ruzzi and Donchev as the heads-up protagonists.

The final table of the ESPT Barcelona Main Event resumed at the start of Level 32 with blinds of 100,000/200,000 and a 30,000 chip ante. Being desperately short, much of the early action concerned Corinne Bauche and, after two uncalled shoves, she tripled up in a hand against Andrew Chen (9♠ 9♣) and Daniel Barriocanal (A♥ K♠) when her pair of Eights made a gutshot straight on the River.

Barriocanal also lost a million chips to Vladislav Donchev (J♣ J♥ > K♠ 7♦) before doubling up against Simon Hemsworth A♠ A♣ > J♥ J♣ – reducing Hemsworth´s stack of chips to a pile of dust. Hemsworth moved what chips he had remaining into the middle with 4♦ 5♥, but failed to improve past Matthias Ruzzi´s Q♥ J♥ and was eliminated in ninth place.

Another Miserable Result for the Spanish

Bela Toth was the next player to depart the action – his A♦ 10♥ missing its gutshot draw to be bested by Nir Levy´s A♥ A♠ – but Levy then took a hit to his stack when Corinne Bauche spiked an Ace on the River to double up against the chip leader A♣ K♣ > 8♣ 8♠. Andrew Chen also managed to spike an Ace to double up his four big blinds against Bauche´s pocket Sevens, and it was Daniel Barriocanal who was ultimately the next player to leave the ESPT Barcelona Final Table.

The Spanish have been having a pretty miserable time at the ESPT/EPT Barcelona – having made just one final table appearance in all the major events that have taken place to date (Jorge Soler Viudez came third in the Senior´s Event #3), and Barriocanal was the last hope of a Spanish victory in the ESPT Main Event. Unfortunately he decided to shove all-in on a flop of 8♥ 2♥ J♥ with K♣ K♦ and Vladislav Donchev had an easy call to make with J♣ 2♦. The two pairs held, and Barriocanal was bust in seventh place – Donchev moving into a commanding chip lead.

Chen and Bauche Bust – Deal Made between Final Four

Andrew Chen´s brave attempt to recover from the hand in which Corinne Bauche tripled up earlier in the day came to an end during Level 35 (blinds now 200,000/400,000 – ante 50,000) when he moved all-in with A♠ 10♠ and failed to connect with the board to improve past Vladislav Donchev´s 2♠ 2♦, and quickly after Corinne Bauche was eliminated in fifth place when her A♠ J♦ also failed to connect with the board against Mattias Ruzzi´s 4♦ 4♥.

As the game went four-handed, the remaining players agreed a deal that saw Vladislav Donchev lock up € 268,500,  Nir Levy € 188,511, Mattias Ruzzi € 178,550, and Hakim Guitoun € 178,550. The deal left €20,000 for the winner and €10,000 for the second placed player and, whereas deals usually accelerate the conclusion of a tournament, Mattias Ruzzi´s victory was partly attributable to a magnificent trap he set to take chips off of Donchev and eliminate Hakim Guitoun in fourth place.

Ruzzi Plays a Blinder and Doubles Up into Massive Chip Lead

The pivotal hand of the ESPT Barcelona Main Event came almost immediately after the deal had been agreed. Ruzzi, Guitoun and Donchev had all paid to see the flop of 2♥ A♠ A♥. Ruzzi, holding A♦ 7♣, was the first player to act in the post-flop action and smartly checked his option. Guitoun (8♦ 8♥) raised to 1.1 million chips, and Donchev made the call. Mattias Ruzzi responded by announcing he was all-in, and while Hakim Guitoun was happy to call, Donchev threw his cards into the muck.

The 7♥ on the Turn and 6♥ on the River completed Guitoun´s Ace-High flush, but the 7♥ had also completed Mattias Ruzzi´s Full House, and Guitoun was eliminated in fourth place – after which Mattias Ruzzi immediately doubled up with pocket Eights against Donchev´s A♠ Q♣ (the curse of Ace-Queen continues) to take 35.76 million chips into Level 36 against Vladislav Donchev´s 9 million chips and Nir Levy´s 6.06 million chips (blinds now 300,000/600,000 with a 60,000 chip ante).

The conclusion to the ESPT Barcelona Main Event lasted just fifteen minutes after Guitoun´s departure – Nir Levy moving all-in with J♣ 9♥ and failing to find a Jack to improve past Mattias Ruzzi´s Q♦ 9♦, and then Vladislav Donchev also missing the board with K♦ J♥ to finish second to Mattias Ruzzi´s 3♦ 3♠ – Ruzzi wrapping up the final table of the ESPT Barcelona Main Event in a little over six hours after starting the day with just fourteen big blinds.