On Tuesday, another WSOP champ was crowned as Matthew Wilson takes down the first WSOP.com online championship. 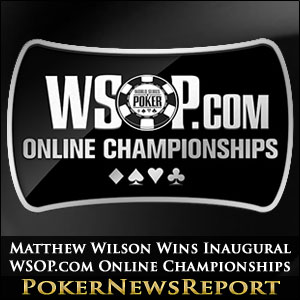 On Tuesday, another WSOP champ was crowned as Matthew Wilson takes down the first WSOP.com online championship.

Hours before Ryan “The Beast” Riess took down the 2013 WSOP Main Event, Matthew Wilson was making headlines of his own by winning the WSOP.com inaugural Online Championship. Dubbed the “Online Nine,” the online equivalent of the WSOP Main was strategically timed between Day 1 and the heads-up portion of the final table.

Featuring a top-prize of $50,000, the Online Championship was comprised of nine players, each of which won their way into the special SNG by taking down one of nine online side events. The SNG took place live at the Penn and Teller Theater in the Rio – the same location as the WSOP Main Event. Like the Main, the Online Championship was divided into two days. On the first day, the original nine played down to two. The heads-up portion of the match was played yesterday as an undercard to the conclusion of the Main Event.

Wilson, known as “Retiredmilitary” on WSOP.com would take on Matthew “PlanetSchutlz” Schultz for the title. Both players were relatively unknown entities in the poker world before their appearance under the bright lights of the Rio. To Wilson’s credit, he did finish 112th in the 2006 WSOP Main Event, winning just over $50,000 for his deep run in the largest Main Event field ever.

In what amounted to about an hour long match, Schultz would find himself on the ropes several times. At one point he jammed with K-high only to catch a lucky King on the river. But eventually his luck would run out. On the final hand, Schultz got it all-in with K8 off-suit, slightly ahead of Wilson’s QT suited. Schultz caught an 8 on the flop, but Wilson would catch runner-runner straight cards to secure the hand and the match.

Schultz won $30,000 and immediate recognition for his second place finish – not bad considering the special event was a promotional freeroll. It was the Sioux Falls, South Dakota native’s biggest live tournament cash to date.

Hours after the match ended, Jay Farber and Ryan Reiss entered the Penn and Teller to play for a substantially larger sum of money and the prestige of being named a world champion. After a grueling 90 hand affair that saw Riess abuse his outclassed opponent, “The Beast” would raise his hands in victory. Riess received $8,361,570 and the most sought after bracelet in poker for the win.

And thus concludes another year of the WSOP. See you in 2014.