Matthew Lapossie experienced some amazing swings of fortune at the final table on his way to taking the WPT Fallsview Poker Classic Main Event in Niagara Falls. 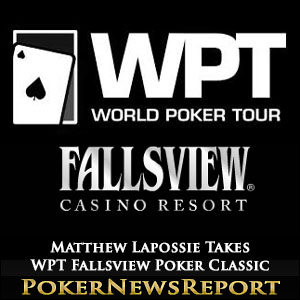 Matthew Lapossie experienced some amazing swings of fortune at the final table on his way to taking the WPT Fallsview Poker Classic Main Event in Niagara Falls.

For anybody who was railing eventual winner Matthew Lapossie, Niagara Falls was an appropriate setting for the conclusion of the WPT Fallsview Poker Classic. Lapossie had more ups and downs on the final day of the tournament than any recent winner of a World Poker Tour event, but eventually found the cards to take the event down for $363,197 (CAD)/$326,866 (USD).

Going into the final day, nobody could have foreseen the drama that was about to occur; and, as the ten survivors from the two previous days of action took their seats at the Grand Room in the Fallsview Resort Casino, the relative chip stacks looked like this:

With just a few minutes left in Level 23, and the blinds just about to increase to 12,000/24,000 (ante 4,000), it was no surprise to see the two short stacks – John Boulougouris and Xiaohu Chen – get involved in the action during the early stages. Unfortunately for both players, their involvement in the WPT Fallsview Poker Classic ended with their first attempts at doubling up – both against the same player and against the same hand!

In just the second hand of the day Xiaohu Chen shoved all-in with A♣ Q♦ and he was isolated by Spiro Mikrogianakis who had been dealt J♥ J♠. The board ran Ten-high and Chen was eliminated in tenth place. Just three hands later John Boulougouris moved all-in with Q♥ Q♠. Again Mikrogianakis made the call with pocket Jacks, and he flopped a set to send the unfortunate Boulougouris to the rail in ninth place.

Lapossie Starts Well – But Then the Cracks Appear

Matthew Lapossie´s day started as well as he could have hoped for. A big river bet forced Dylan Wilkerson out of a valuable pot and some four-bet pre-flop aggression against Spiro Mikrogianakis saw Lapossie´s chip stack rise beyond 2 million. It rose beyond 2.6 million when Lapossie turned a straight flush to eliminate Peter Labib 9♥ 10♥ > A♥ 3♥, but then it all started to go pear-shaped.

Dylan Wilkerson cracked Lapossie´s Aces 9♠ 9♦ > A♥ A♣ for a valuable double-up, Spiro Mikrogianakis (8♣ 6♥) flopped trip Sixes to relieve Lapossie of another 140,000 chips and – after Dave Graham had doubled-up against Jason James (A♠ A♥ > A♣ Q♠) – Mikrogianakis joined Lapossie at the top of the leaderboard when rivering a Ten-high straight against him.

Matthew Lapossie´s chip stack looked to have a better chance of surviving if you had put the chips into a barrel and thrown them over the edge of nearby Niagara Falls, but an incredible sequence of double-ups enabled him to become competitive again.

In the first hand of the official final table Howie Leung moved all-in with 5♣ 5♠ and Lapossie made the call with A♣ K♥. The K♦ on the flop gave Lapossie the double up and, three hands later he doubled-up again against Josue Sauvageau when his K♠ K♣ held against Sauvageau´s Q♦ 3♣.

Dylan Wilkerson assumed the chip lead when busting Howie Leung in sixth place A♠ K♥ > 8♠ 8♦, but lost a stack of his chips to Lapossie when he continued his incredible recovery with rivered Trip Fives against Wilkerson´s pocket Threes.

Dylan Wilkerson regained his advantage at the top of the leaderboard when sending Josue Sauvageau to the rail in fifth place A♣ Q♥ > J♦ J♥; but there was still more to come from Matthew Lapossie, and he took the lead in a dramatic hand which saw the elimination of Spiro Mikrogianakis in fourth place.

In the hand, Dylan Wilkerson had moved all-in from the button with Q♥ 10♠. Lapossie made the call from the Small Blind with A♥ K♣ and seeing the value in the pot, Spiro Mikrogianakis also committed the last of his chips with 6♥ 6♠. The flop and Turn of 3♥ J♠ 3♠ / 7♣ kept Mikrogianakis in the lead, but the K♦ spiked on the River to send him out of the WPT Fallsview Poker Classic and triple up Matthew Lapossie into the chip lead.

Lapossie extended his lead with the elimination of Jason James in third place A♣ K♦ > A♠ 7♣ and, from being the shortest stacked player when the official final table began, Lapossie went into the heads-up against Dylan Wilkerson with a 8.10 million -v- 3.18 million chip advantage.

Despite his massive chip advantage, there was still no easy finish for Matthew Lapossie. Having reduced his opponent to 2 million chips during the early exchanges, a turned Straight > a set of Tens enabled Dylan Wilkerson to double-up; but Lapossie used the size of his chip stack to good advantage to reduce Wilkerson to his last 2 million chips – helped by flopping top pair in two consecutive hands.

The final hand saw Wilkerson move all-in with 4♠ 4♥ and Lapossie made the call with A♠ 5♠. The flop of A♣ 6♣ 10♥ put Matthew Lapossie on the verge of becoming the WPT Fallsview Poker Classic Champion with the flopped pair of Aces, and his victory was confirmed when the 6♠ and 2♥ were dealt on the Turn and River.