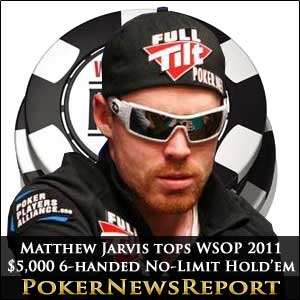 Canada’s Matthew Jarvis won a massive pot late in the opening day’s play of event #40 to become the chip leader at the $5,000 Six-Handed No-Limit Hold’em tournament in the Rio.

British Columbia’s Jarvis – a November Niner last year – ended the day on 303,800 chips after rivering a full house against trip aces and an over pair that ultimately eliminated Michael ‘The Grinder’ Mizrachi.

Vegas resident Randy Dorfman – who also picked up a large pot when his two pair beat Englishman Neil Channing’s aces in level eight – sits in second place on 280,000, while Maryland’s Anthony Gregg is a distant third on 178,900.

However, Jarvis made a big move just as the chips were being bagged at other tables when he picked up a large pot in a three-way battle with 2010 WSOP $50,000 Players’ Championship winner Mizrachi and another player.

Hollywood’s Mizrachi, who showed 10h-10d, was covered by Jarvis (6c-6h) and his other opponent (Ac-Qd). The flop came down Ad-9s-5d while the As on the turn gave the third player in the hand trip aces. However, the 6s on the river provided Jarvis with a full house for a double knockout and the chip lead.