The conclusion of Event #8 at the Borgata Fall Poker Open finished around the time that tournament winner Matt Weiss would have normally got up to go to work. 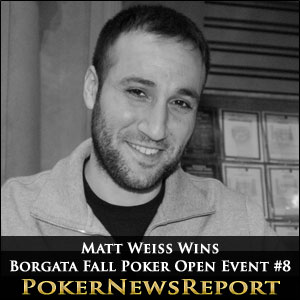 The conclusion of Event #8 at the Borgata Fall Poker Open finished around the time that tournament winner Matt Weiss would have normally got up to go to work.

With re-entries allowed for the first nine levels, it was always going to be a long night; and despite the traditional rush out of the door when the 81-player money bubble burst just after 10.30pm, it was not until 4.00am that the final table was set.

Staying Up Late is Good for Weiss

By the time the cards were in the air for the final table of the Borgata Fall Poker Open “Big Stack” event, blinds were already up to 40K/80K (ante 10K) and rising every 30 minutes; however it was a full level and a half until the first player left the table – the unfortunate Hang Liao running his pocket Nines into the pocket Aces of Scott Love to be eliminated in tenth place.

Scott Love lost a lot of his new chips to Matt Weiss – who chipped up beyond the 4 million barrier during the next level – and Love was eventually bust in ninth by Michael Drabot JJ > Ace-Nine when Drabot flopped Quads. It was almost two hours into the final table before a third player was sent to the rail – this time the short-stacked Jeff Opie, whose Ten-Eight shove was called by both Matt Weiss and Jeff Epstein, and Weiss paired his Queen to eliminate Opie in eighth.

Big Slick Good for Epstein – but only in Small Pots

As the blinds rose again (now at 80K/160K – ante 20K), Mike Bonney´s stack of 400,000 chips was worth less than 3 big blinds when he chose to commit to the pot with Jack-Three. Jeff Epstein made the call with Ace-King (which held) and Bonney was out in seventh. Anthony Merculla was in a similar situation in the next level when his stack had dwindled to 500,000 (2½ big blinds). He moved all-in with Ten-Nine, and again Jeff Epstein had Ace-King, and again it held as Merculla was bust in sixth.

Ray Ross at least put up a fight before he was bust in fifth. Ross had been crippled when his pocket Aces had been cracked by Jeff Epstein earlier at the final table; but he had doubled back up against Epstein when his pocket Nines formed the middle of a straight. Ultimately, his handful of big blinds was not going to last forever, and he got the last of his chips in with Ace-Nine, and failed to improve against Michael Drabot´s pocket Jacks

With the time moving on to 7.00am, Matt Weiss had just under half the chips in play, while the other three players were fairly evenly stacked. The players decided to have one last hand which would decide the winner, with second to fourth places decided by their relative chip stacks. As luck would have it, Matt Weiss was dealt A♣ Q♠ and won the hand, scooping the $39,266 first prize and Borgata Fall Poker Open trophy.