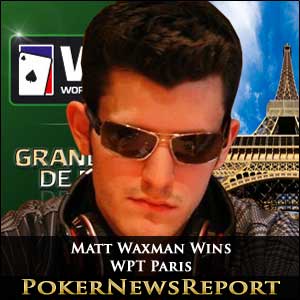 Starting the day fifth of the six remaining players, Matt Waxman started his ascendancy early in the day and then used position and wits to steal hand after hand and increase his chip stack even further throughout the day.

From the very beginning of play, life was going to be tough for Martin Jacobson. Starting the day with only 20 big blinds and continually being put under pressure by Waxman, Jacobsen eventually shoved his A♠ J♦ into the J♠ J♥ of Mikko Sundell. With no ace on the board to help the short-stacked player, Jacobsen was the first to leave the table with €88,900.

Waxman Takes the First Big Pot of the Day

Mikko Sundell was quickly to relinquish his new gained chips, as Matt Waxman countered his post 7♣ 4♣ 9♣ raise with a shove of 1.7 million chips. Sundell called, showing A♦ K♣, but Waxman had already made the flush with 6♣ 5♣ and, with no further clubs appearing on the river, Matt Waxman crushed the Finn and catapulted into the chip lead.

Sundell Next to Fall

Crippled by the loss, Mikko Sundell was next to go – pushing into Byron Kaverman´s A♥ J♥ on a board of 5♦ 5♣ 8♥ while only holding K♦ 6♦. The J♠ was dealt on the turn, meaning that Sundell would only survive the hand if a King was dealt on the river. The 2♣ was good news for Byron Kaverman as he sent Sundell to the rail and improved his own chances of success – temporarily.

When Stacking Up Can be Harmful to Your Tournament Life

A pattern was emerging in the way eliminations were being made. Sundell had busted Jacobson and then been eliminated by Kaverman, and Kaverman was next out at the hands of Fred Magen. Magen had opened to five times the big blind (blinds now 25,000/50,000 – ante 5,000) and Kaverman moved all-in showing Q♥ 9♠. Magen´s bet had been based on his hand of A♥ 7♠ which turned out to be justified when the board fell Q♦ 10♦ K♥ / J♥ / 7♥, giving Magen the straight against Kaverman´s Queens.

The three-handed session was the longest of the final day, but it came to an abrupt end when Fred Magen´s attempted steal with a raise of 160,000 prompted Matt Waxman – not for the first time – to come back over the top shoving all of his substantial chip stack into the middle. Magen called with K♠ Q♠, but Waxman had him covered with A♣ K♣ and, with no Queen and a lack of spades on the board, Fred Magen continued the theme of last big winner is next big loser.

The Heads Up Breaks The Mould