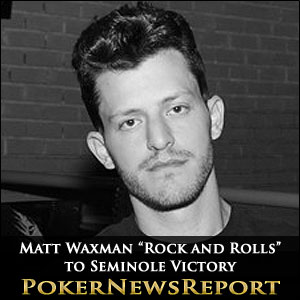 The WPT Regional Seminole Hard Rock “Rock ‘n’ Poker” Main Event was another success for the World Poker Tour, as 482 players – including top names such as Darryl Fish, Chino Reem and Michael Mizrachi – ponied up the $1,650 buy-in to create a prize pool of $723,000 (the event was guaranteed for $500,000) which would be shared out by the top 54 players.

Day 2 of the WPT Regional Seminole Hard Rock “Rock ‘n’ Poker” Main Event saw the money bubble burst; but more significantly saw the rise of Matt Waxman to the top of the leaderboard after he had doubled-up with an overpair of pocket Kings against Cong Pham´s (Q♣ J♣) flopped top pair. Fourteen players survived Day 2 and returned to the Seminole Hard Rock Hotel and Casino yesterday to play down to a winner.

There was a major shock on the way to the final table as Robert Mizrachi – who had come into Day 3 second in chips behind Matt Waxman – was eliminated in tenth. Mizrachi had already doubled up Yuan Yangshen early in the day, and got the last of his chips into the middle on a flop and Turn of K♥ J♥ 6♠ / A♥. He received a call from Darryl Fish and the cards were on their backs:

The miracle card Mizrachi needed did not appear on the River (2♣), and the official final table of nine was set.

Double Ups No Good for Prado and Spires

The first level of play at the Final Table saw a rash of double-ups – John Pizano winning a flip against Javier Prado 10♥ 10♠ > A♣ K♦, before Prado recovered a little by doubling up against Tyler Stafman A♥ 10♦ > A♣ 9♦, and then Kevin Spires also benefitted from Tyler Stafman´s generosity A♦ Q♣ > Q♦ 7♦.

However, with blinds increasing to 15,000/30,000 (ante 5,000), Javier Prado and Kevin Spires were quickly back in the danger zone, and exited the WPT Regional Seminole Hard Rock “Rock ‘n’ Poker” Main Event within fifteen minutes of each other – Prado (Q♠ Q♦) falling in ninth to the paired Ace of Yuan Yangshen (A♣ Q♣), while Spires (7♠ 7♣) failed to improve past Yangshen´s pocket Tens and was eliminated in eighth.

Yangshen on a Roll – Leads at Dinner

Two further quick eliminations helped Yuan Yangshen take a narrow chip advantage at the dinner break. Yangshen first bust out John Pizano in seventh place – when his K♦ Q♥ outkicked Pizano´s K♣ J♠ on a King-high board – and then he flopped Quad sixes with 6♣ 6♦ to eliminate Mark Morono (A♣ 9♥) in sixth place.

Matt Waxman tempered Yangshen´s runaway final table performance by taking him for 620,000 chips with a paired Seven, while Tom Gleason also improved his chances of a six-figure cash in the tournament by doubling up against Tyler Stafman 2♦ 2♣ > A♣ Q♠ to leave the dinner break chip counts looking like this:

Stafman Flatters to Deceive – Heads-Up Set within an Hour

Whatever Tyler Stafman ate for dinner, it temporarily improved his fortunes at the final table of the WPT Regional Seminole Hard Rock “Rock ‘n’ Poker” Main Event. Immediately after play had resumed (blinds now 25,000/50,000 – ante 5,000), Stafman doubled up against Matt Waxman A♣ 7♣ > Q♣ J♥ and then wrecked Tom Gleason´s chances of a six-figure cash by doubling up again J♣ 7♣ > 5♠ 5♥.

Darryl Fish was unfortunate to bust out in fifth – losing a flip against Yuan Yangshen 9♠ 9♦ > A♠ 10♥ – and Tom Gleason was soon to bust out in fourth after running his A♦ J♣ into Matt Waxman´s K♥ K♣, and missing all his outs after the flop of Q♠ 10♣ 3♠. The heads-up was set within an hour of the players returning from dinner when Tyler Stafman´s paired Q♠ 10♦ was not good enough to best the two pairs of Yuan Yangshen (K♣ 8♣) and Stafman was sent to the rail in third.

Heads-Up Ends in a Draw

Going into the heads-up, Matt Waxman and Yuan Yangshen had practically identical chip stacks. Matt Waxman took a few small pots at the beginning of the encounter but, as both players still had in excess of 100 Big Blinds, the two players decided to share first and second place prize money – with Waxman declared the winner due to his narrow chip advantage at the time.