Matt Waxman takes a narrow lead ahead of a tightly packed field into what promises to be an intriguing penultimate day of the WPT Main Event. 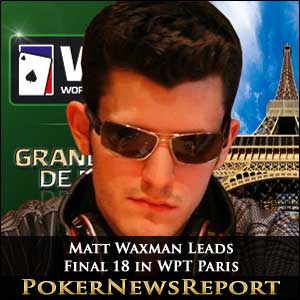 Matt Waxman takes a narrow lead ahead of a tightly packed field into what promises to be an intriguing penultimate day of the World Poker Tour (WPT) Main Event in the Aviation Club de Paris.

On a day when the French challenge capitulated (the only Frenchman in the top 6 is a woman!), Matt Waxman´s rise through the ranks was courtesy of a Dutchman (Pim van Wieringen), a Canadian (Yves Farges) and a German (Benny Spindler), and the American takes just over double the average stack into Friday.

If Day 2 had been remarkable for the speed at which players chucked away their tournament lives (play for the day concluded before the dinner break), Day 3 was poker suicide. Players departed with such regularity that half way through the day the tournament director had to change the structure of play from “down to the last 27” to “down to the last 18”. Ivan Freitez (overnight 8th), Jani Sointula, and McLean Karr (overnight 6th) had departed before their seats had warmed up and, even though 61 players had started the day, the bubble of 36 was reached within four hours.

The luck which befell the lovely Rebecca Gerin typified the fortunes experienced by the French yesterday. On a flop of 5♦ 2♦ 6♦, Rebecca moved all-in with 10♦ 8♦ for a flopped flush, only to be snap-called by Evgeny Zaystev who was holding 3♦ 4♦ for a flopped straight flush. Once the bubble burst, it was fold or shove time for the short stacks, and within the hour we had waved goodbye to Bellagio Cup winner Elio Fox (31st), UKIPT winner Max Silver (28th) and EFOP Paris winner Alexandre Viard (26th).

The Fate of Le Resistance

The overnight leader from Day 2, Francke Pepe, is still involved in the game, and had built well on his chip stack half way through the day. Unfortunately for him, as the blinds rose, he found himself getting frequently squeezed by Guillaume Darcourt and eventually lost a big slice of his stack to his compatriot in a Kings v Jacks race. A similar K♠ K♦ v J♥ J♠ race also led to the demise of Day 2 second placed Christophe Lesage, who finished in 19th after being busted by last woman standing Nesrine Kourdourli, while the third leg of the tri-colour, Alexandre Brivot, three-bet Joe Cassidy once too often, and had to let go of a 200,000 chip pot just before the close of play.

The killer pot which elevated Matt Waxman to the top of the leaderboard also came late in the day against Benny Spindler. With blinds at 2,500/5,000 and a flop on the board of 10♦ 7♦ 2♣, Waxman checked from early position. Martin Jacobson, who was also in the hand, bet 18,000 and Spindler called. Waxman then raised to 58,000, Jacobson called and Spindler moved all-in for 182,000 chips. Waxman called and Jacobson got out of the way.

Benny Spindler A♦ 8♦ drawing for a flush

The turn of 7♠ gave Waxman quad 7s, and just to rub salt into Spindler´s wounds, the 4♦ was dealt on the river.

Matt Waxman will not be having things all his own way when play recommences today at the Aviation Club de Paris. Day 1A chip leader, Mikko Sundell, is hot on his heels after his full house of Kings over Queens bested Elio Fox´s Jacks over Kings. Russian Dmitry Stelmak also enjoyed a good day – especially when dispatching Bjorn Artursson to the rail in a ¼ million chip pot – and, as mentioned above, Frenchwoman Nesrine Kourdourli knows a thing or two about the right time to get her chips in the middle.