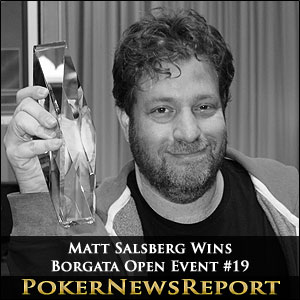 One of the smallest fields in this year´s Borgata Poker Open series assembled to compete in the $1,500 buy-in NL Hold´em Event #19 – a two-day tournament which completed sixteen levels of play on Saturday which reduced the starting field of 93 to an unofficial table of ten. Unofficial because only nine were going to get paid!

The unlucky bubble boy was the player who had started Day 2 with the smallest chip stack – Michael Malm – who had doubled up his seven Big Blinds against Jesse Yaginuma in one of the first hands of the day, but who found that lightning does not strike twice when getting all-in against Yaginuma with pocket Tens – and failing to improve past Yaginuma´s pocket Kings.

Consequently, when the remaining nine players drew a collective sigh of relief, their chip stacks looked something like this:-

Salsberg Stays Away from Trouble as Short Stacks Fall

Although six of the nine remaining players had smaller than average chip stacks, the action was slow to kick off. It was more than an hour before Kenneth Aldridge became the first player to leave the table in the money when his pair of Deuces was ambushed by Thomas Hoglund´s trip Tens, and a further hour before Hoglund´s inferior Ace (A-7) was found wanting against Jesse Yaginuma (A-J) to bust in eighth.

The game rambled along at a slow pace until Matt Salsberg doubled-up against Mike Gagliano (pocket Tens > K-Q) and Michael Melkersen eliminated John Iraz 9-7 > K-10 after both players had made pairs on the flop, but Melkersen hit trip Sevens on the river. Melkersen temporarily moved into the chip lead just after the next break with the elimination of Roger Lussier in sixth (pocket Sevens > A-Q), until Jesse Yaginuma found the perfect moment to call Mike Gagliano´s shove with K-Q > K-10 to bust Gagliano in fifth.

Yaginuma also picked up a big pot just before the blinds rose to 8,000/16,000 (ante 2,000) , when a post-river shove forced Jayakrishnan Nair and Michael Melkersen to snap-fold and, as four-handed play proceeded, the respective chip stacks looked like this:-

Salsberg Flies into Chip Lead and Chops the Pot

From being a virtual spectator, Matt Salsberg took control of Event #19 of the Borgata Poker Open. A double up against Michael Melkersen (9-9 > A-K) chipped Salsberg up into second place, before Melkersen moved all in on a board of K-10-J with K-10 (for two pairs) and Salsberg made the call with J-J (for a set of Jacks): Melkersen failed to improve and he was out in fourth.

At this point a deal was reached that would see the three remaining players chop the pot and Salsberg (who was now the chip leader) take home the Borgata Poker Open trophy. As far as Yaginuma and Mair were concerned, the deal suited them because they were assured of a better prize than they were likely to get if Salsberg continued running hot; while an early finish allowed Matt Salsberg to late register for Day 1A of the WPT Borgata Poker Open Championship (which was a bad idea in hindsight as he was bust by Allen Kessler a few hands from the end of the day).