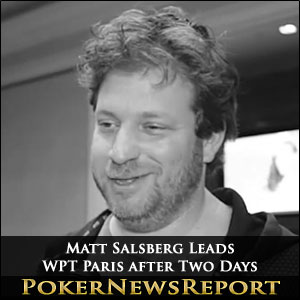 It was a quick taxi ride across Paris for the world´s leading poker players, to get from the concluding WSOPE events at the Casino Barriere in Enghien-les-Bains to the World Poker Tour Main Event at the Aviation Club on the Champs Elysees.

After late registration and re-registration was held open until the start of Day 2, 187 players chipped up the taxi fare the €7,500 buy-in to create a prize pool of €1,332,375 (after deductions); from which the top 21 players will each take a min-slice of €14,665 and the winner of the WPT Paris Main Event will collect €340,000 (including a seat at the WPT Champions Event at the Borgata in April).

Salsberg Looks for a Repeat Performance

When the chips were bagged and tagged at the end of Day 2, it was last year´s WPT Paris Main Event winner Matt Salsberg who was at the top of the leaderboard – bagging up an impressive 212,600 chips, courtesy of a six-bet jam against Ekrem Sanioglu following which Salsberg´s Aces held up against the Frenchman´s Ace-Queen.

Salsberg is followed on the leaderboard by Hicham Hilmi – who made a big call with 10♠ 10♣ against the K♠ J♣ of Athanasios Polychronopoulos to finish the night with 200,700 chips – and Vasili Firsau, who rivered an Ace to best Steve O´Dwyer´s pocket Queens and send the EPT Grand Final winner out of the event.

The sixty-two other players still in the event include several who made a major impact at the WSOPE last week. David Peters (171,200 chips), Joni Jouhkimainen, (104,200 chips) Timothy Adams (79,900 chips) and Jason Koon (76,400 chips) all cashed in the WSOPE High Rollers Event won by Daniel Negreanu (who skipped the WPT to film a PokerStars commercial in Barcelona), while Shannon Shorr – who final tabled the WSOPE Main Event – will take his short stack of 26,200 chips into Day 3 of the WPT Paris Main Event.

Sadly the WSOPE Main Event winner will not be gracing the tables at the Aviation Club in Paris today. Adrian Mateos Diaz (A♣ Q♣) was eliminated during Level 7 by Marvin Rettenmaier (J♣ 9♣) when both players got their chips in on a flop of 10♥ 8♣ 3♣. The 7♠ on the Turn gave Rettenmaier the straight, and there was no saviour Club on the River (3♠) to rescue Diaz from elimination. Rettenmaier completed the day with 128,300 chips.

When the players return to the Aviation Club in Paris for Day 3 of the WPT Paris Main Event they will be entering Level 11 (blinds 600/1,200 – ante 200). With only 65 players remaining in the tournament, it is anticipated that there will only be five 90-minutes played today and the money bubble will not burst until tomorrow (the televised Final Table is not scheduled until Wednesday). Those in the happy position of having more than 100 Big Blinds to play with include:-