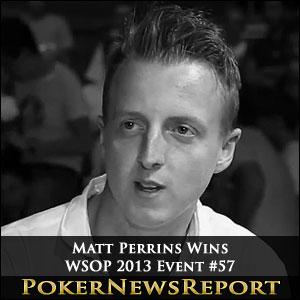 The first player to be eliminated from the final table was Kent Roed, who lost a pre flop showdown to Randal Flowers. Flowers went all in before the flop with A♠ Q♣ and was called by Roed, who was outkicked with A♦ J♣.

Roed was unable to put himself in front on the board, which showed 3♠ 5♣ 6♣ 4♣ 5♣ and he was knocked out of the tournament in ninth place as a result.

Next to go was Joe Serock, who was knocked out in eighth place after coming second best in a showdown against Perrins. Serock raised to 90,000 before the flop, which led Serrins to move all in with A♠ K♠. Serock promptly called, but was outkicked with A♦ 9♦.

Perrins went further in front after the flop showed Q♥ J♠ K♦, which gave him top pair on a rainbow board. The turn came 6♦, which kept Perrins in the lead but gave Serock a nut flush draw. The 3♥ on the river, however, did not gave him that draw and Serock was eliminated from the event.

Perrins then went on to claim his second straight final table scalp after he eliminated Flowers from the tournament. After a raise and reraise, Flowers went all in with K♣ K♦ and was called by Perrins, who was slightly behind with A♣ K♣.

Flowers’ Kings were good after the flop, which came J♦ 9♣ 4♣, but the turn changed things completely after the A♠ was shown. The 4♠ came on the river, which won Perrins’ the hand and sent Flowers packing in seventh place.

Thomas Muehloecker was eliminated a few hands later when he was knocked out by Antonio Buonanno in sixth spot. The extremely short stacked Muehloecker went all in before the flop with 2♠ 2♥ and was called by Buonammo, who had a solid hand in K♣ Q♣. Buonammo hit a Queen on the flop to win him the hand and end Muehloecker’s time in the tournament.

Just six hands after Muehloecker’s elimination, Matt Berkey was eliminated after he became the third final table victim of Perrins. Perrins, who had A♦ 7♥, raised to 100,000 before the flop and was reraised to 350,000 by Berkey, who was ahead with A♥ K♦. Perrins then went all in before he was snap called by Berkey.

Despite being outkicked, Perrins managed to go in front in a big way after the flop, which came 10♥ 7♦ 7♠, and it was Berkey who was on the back foot. The 8♦ on the turn effectively ended Berkey’s time in the event, as no card on the river could save him. For good measure, the river came A♣, which gave Perrins a full house before Berkey was officially finished in fifth place.

The eventual winner continued his fine streak when he knocked Buonanno out of the final table in fourth spot. Perrins raised to 120,000 before the flop with A♣ K♠ and was reraised to 360,000 by Buonanno, who was outkicked with A♥ Q♦. Perrins moved all in before being called by Buonanno and, soon enough, a showdown was on our hands.

The flop came 3♠ J♠ 7♣, which kept Perrins’ hand in front. The {5} on the turn did not improve Buonanno’s hand, and he needed something on the river if he was to stay in the event. It didn’t happen, however, as the 9♥ on the turn meant Perrins won the hand and Buonanno was eliminated from the tournament.

Third place went to Seth Berger, who was also eliminated by Perrins before heads-up play commenced. It was another come from behind victory for Perrins, who went all in with K♣ Q♦ before the flop. Berger, on the other hand, was ahead with A♠ Q♠.

The flop was kind to Perrins, however, as it came 8♣ 5♣ K♦, which gave him top pair to put him in front early. The 9♣ on the turn and 3♠ on the river kept Perrins ahead and won him the hand while knocking Berger out of the event, albeit with an extra $315,529 to his name.

Berger’s elimination left Perrins and Pro as the last two player in the event, with Perrins holding a massive 10.5 to 1 chip lead when heads up play began. Pro did well early, managing to get a few double ups to cut Perrins’ lead down to 4 to 1.

It did not help in the long run, however, as Perrins managed to hold on to take out the event. The last hand of the tournament was another come from behind lead for Perrins, as he went all in before the flop with K♣ Q♦. He was called by Pro, who was ahead with A♣ J♠ before any cards were shown on the board.

Pro went further ahead after the 4♣ J♦ 9♣ was shown on the flop. Perrins moved ahead on the turn, however, when the K♦ was shown, and he won the hand and the event after the 9♦ came on the river.