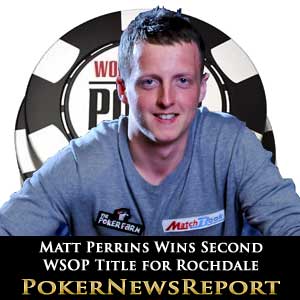 Is Rochdale the new home of poker? OK, many – maybe even most – of you will either have never have heard of this English town or don’t know exactly where it is. That’s not important. All you really need to know is two World Series of Poker (WSOP) bracelet winners come from this town of less than 100,000 people.

The 22-year-old defeated Ukranian-born American Yevgeniy Timoshenko in the final match-up to become just the third player – and youngest – to collect the ‘triple crown’ after having previously won titles on the European Poker Tour (EPT) and the World Poker Tour (WPT).

Now he has been joined by Matt Perrins, who also hails from the Greater Manchester town in the north-west of England, after he collected the $1,500 buy-in draw no-limit 2-7 lowball title in the Rio All-Suite Hotel & Casino last night.

Matt Perrins’ victory is particularly impressive as he had never played this poker variant live until this event started. Seriously. It’s true. And he left with $102,105, as well, from his first visit to the WSOP.

But he admitted that on day one of the lowball event he “didn’t really know what was going on”. With little knowledge of the game, Perrins “kept speaking to mates” about “what to do here, what to do here”.

However, “as the tournament got deeper”, it became clear to Perrins that the game was “kind of similar to hold’em, where opening a lot of pots and three-betting wins you a lot of pots”.

That strategy certainly worked as Perrins – who wanted to try something different as he was bored with Hold’em – managed to see off some of the best lowball players in the world, including Jason Mercier, Robin Rightmire, Josh Brikis, Thomas Fuller, Chris Bjorin, and Bernard Lee at the final table.

His extensive live and online experience – where he has earned over $500,000, primarily at Full Tilt Poker – obviously helped him develop an aggressive and effective strategy.

Incredibly, though, Perrins took an unusual route to learning lowball rules and strategy – by logging on to the Internet to visit video sharing website YouTube.

He watched about half-an-hour of tutorials related to the basics of lowball single-draw – and the rest is history. Yes, it seems crazy, but Perrins swears it’s all true.

London-based Swede Bjorin – who has two WSOP bracelets and is ranked at No.6 on the list of cashes in Vegas – completed a ‘British’ one-two after losing his heads-up battle with Perrins in just over an hour, but still picked up $63,112 for his troubles.

Leading placings and payouts from the $1,500 Draw Buy-in No-limit 2-7 Lowball: