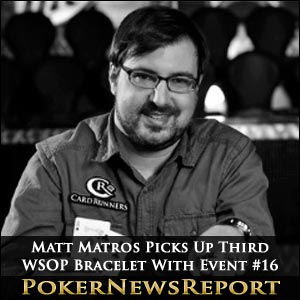 The 35-year-old pro has now won bracelets in three successive years to become the 55th player to bag three or more titles in the series after defeating Mark Radoja heads-up in the $1,500 buy-in Six-Handed No-Limit Hold’em at the Rio All-Suite Hotel & Casino.

Matros – who is renowned for his concentration and studious demeanour – bagged $454,835 for his biggest ever score after defeating Canada’s Radoja, who left with $281,502 as runner-up.

The author of ‘The Making of a Poker Player’ – which tells the story of his early years when he transformed himself from a student into a full-time poker pro – has now moved on to $1,350,031 in WSOP earnings.

The 35-year-old – who is also a teacher – was joined at the final table by the likes of Matt Glantz (seventh for $40,059) and Mike ‘The Mouth’ Matusow (eighth for $40,059), but ultimately had to defeat one-time WSOP bracelet winner Radoja, of Ontario.

With British player Ramey Shaio eliminated in third place by Radoja for $182,521 – when the former’s 3♥ 3♣ lost out to the A♦ 10♦ of the Canadian after a ten arrived on the flop – Matros was left facing Radoja for the title.

They started almost even in chips, only for Radoja to take a big lead early on in their heads-up battle. But Matros battled back to take the lead when he turned two pair and was paid off following a large river bet.

Matros had the title about 20 minutes later when he shoved all-in on the 8♠ turn following a 10♦ 9♥ 2♥ flop. Radoja quite rightly called as he held a straight with his J♥ 7♠. Matros showed 6♥ 5♥ for a flush draw that was completed for the victory when the 10♥ hit the river.