It’s been a good week for Canadian players on the Global Poker Index (GPI) with Matt Marafioti and Sorel Mizzi breaking into the top 10. 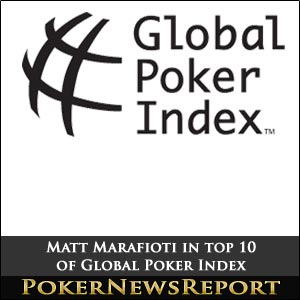 It’s been a good week for Canadian players on the Global Poker Index (GPI) with Matt Marafioti and Sorel Mizzi breaking into the top 10.

Toronto’s Marafioti enjoyed a great week at the start of December, picking up $90,068 for his runner-up spot at the $5,000 buy-in Texas Hold’em poker event at the Doyle Brunson Five Diamond World Poker Classic in Vegas on the third, before following that up with 15th place in the $10,000 buy-in main event three days later for $39,806.

Mizzi, meanwhile, saw his points total improve by 186.37 after he had dropped a huge 217.16 the week before after his ninth place finish from last year’s WPT Five Diamond World Poker Classic moved into Period 3.

However, Mizzi – who left France with $338,225 for lifting the World Poker Tour (WPT) Rendez-Vous à Paris €15,000 buy-in No-Limit Hold’em High Roller Event in September – broke back into the top 10 when one of his ageing Period 1 scores from this summer’s World Series of Poker (WSOP) boosted his Period 2 points.

Mizzi only had one result in that second period before this change, so giving his points total a much-needed improvement.

Soulier and Waxman Drop Out of Top 10

But American David Sands climbed five spots into 16th on 1919.89 points following his success at the $5,000 buy-in Texas Hold’em event at the Doyle Brunson Five Diamond World Poker Classic for $158,644.

French star Bertrand ‘ElkY’ Grospellier – who returned to the top of the GPI last week after four months – remains on top with 2,501.75 points, although that is 32.7 down on last week.

Mercier will most likely climb higher in the next GPI top 300 as he finished seventh at the just completed $20,000 main event #3 in the Epic Poker League (EPL) for $89,680 at the Palms Resort and Casino in Vegas.

That finish might not be enough to take Mercier to the top of the GPI rankings, but Seidel could well be knocked down to third.

Look out For Christian Harder to Make Big Move

Nottingham-based Sam Trickett (up 155.12 points to 2,320.02), meanwhile, moved up two spots to fifth after two qualifying results dropped into older periods, while American Sam Stein – whose points stayed the same at 2,317.85 – fell down a spot to sixth.

Incredibly, a third Canadian in Shawn Buchanan (2,313.16) sits in seventh spot, although he did drop one place while actually gaining 93.76 points after 25-year-old Trickett’s rise.

A second Englishman, Chris Moorman, remained in eighth place on 2,133.35, although he also picked up 81.78 points.

Andrew Lichtenberger Moves up to 55th

New York State’s Andrew Lichtenberger (on 1,580.99 points) showed the biggest climb in the latest rankings as he moved up 152 places to 55th following his fourth place – for $218,933 – at the main event of the WPT Doyle Brunson Five Diamond World Poker Classic.

With close to a third of cash finishers at the WPT event at The Bellagio already within the GPI’s top 300, 25 players saw their points totals increase, with Broolyn’s Vanessa Selbst moving up an noteworthy eight spots to 12th place on 2046.00 following her third-place finish.

Some big-name pros suffered huge drops, of course, including Los Angeles-based Ali Eslami and Jesse Martin, of Massachusetts, who both saw two WSOP cashes fall into Period 2 to leave them with just one result in the heavily-favoured Period 1.

The Brighton native is ending this year in some style, having won the WPT Doyle Brunson Five Diamond World Poker Classic main event for $821,612 to add to his third place finish at the $5,000 buy-in preliminary tournament just a few days earlier for $56,782.

Seventeen players fall out of rankings

However, New Yorker Filippi’s 12th place finish at the EPL main event for $50,920 should see him return to the top 300 this week.

Check back here every week for the latest developments on the GPI, or check our Global Poker Index page for more info.